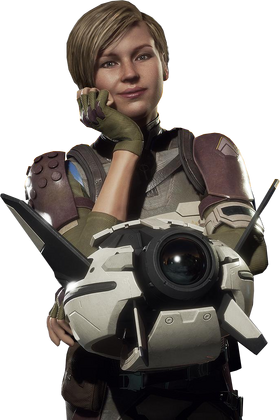 Sergeant Cassandra "Cassie Cage" Carlton is a fighter introduced in Mortal Kombat X. She is a sergeant serving in the special forces and as the daughter of Johnny Cage and Sonya Blade. Her parents were among the few Kombatants to survive the wars against Outworld and Netherrealm and were instrumental to Earthrealm's victories. Cassie is quick-witted as her beloved father and strong-willed as her mother, which makes her popular among her Special Forces unit. But these traits hide a seed of self-doubt cultivated by the demanding nature of her commanding officer: Sonya.

The offspring of Johnny Cage and Sonya Blade laid the smackdown on Shinnok a few years back, but even that wasn't enough to escape the shadow of her legendary parents. Whenever Cassie isn't defending Earthrealm, she's fighting to prove worthy of their legacy.

All previous abilities, Awakened Power (Unintentionally summoned her green halo when protecting a loved one), Instinctive Reaction (Her power automatically protects himself from attacks), Forcefield Creation (Can create a full body forcefield)

Attack Potency: Large Building level (Comparable to her teammates such as Kung Jin. Heavily improved in MK11 where she was promoted to Commander. Defeated General Blade and several Revenants) | City level (Defeated Corrupted Shinnok, who was far above his base form in which he could effortlessly defeat Raiden, who can create and control storms, which requires this much energy)

Lifting Strength: Class 5 (Can rip out heads, same applies for her drone) | At least Class K

Intelligence: Above Average; leads her own team, and is a skilled combatant.

Weaknesses: Loved ones have to be in danger for her to go into the Inner Power state. 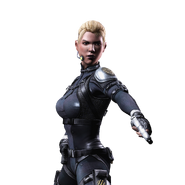 Inner Power.
Add a photo to this gallery

Jade (Rock Hard Gladiators) Jade’s Profile (Both at 7-B)