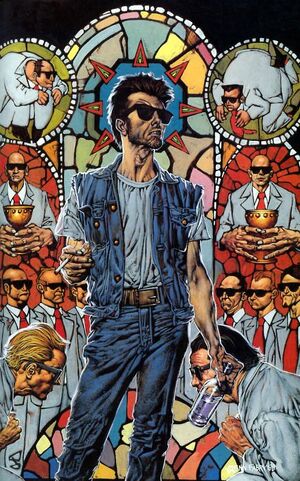 Powers and Abilities: Superhuman Physical Characteristics, Longevity, Immortality (Type 2 and 3), Regeneration (Mid; Can survive decaptation, but the head needs to be sewed back to regenerate. Got shot through the head and kept driving.), Enhanced Sense of Smell, Resistance to Poisons, Drugs and Toxins

Attack Potency: Wall level (Can crush human skulls with his bare hands, which requires this much energy, and can kick holes through walls. Nearly killed his girlfriend with a slap. Destroyed a wooden door with a kick, which would generate this much energy. Threw a man through a wall)

Speed: Superhuman (According to him, it takes 5 seconds to run a hundred meters)

Lifting Strength: Class 5 (Should be stronger than regular humans like Jody. Can casually snap necks and throw grown men across the distance of a room. Teared off someone's hand.)

Durability: Wall level (Survived an explosion. Should scale to his own striking strength). Regeneration and Immortality make him hard to kill

Stamina: High, can knock out entire gangs of thugs without tiring up

Standard Tactics: Cassidy has no formal training, so he just throws basic punches and kicks. If he's ever stabbed or shot at during a fight, he'll immediately try to bite his opponent and suck their blood.

Weaknesses: Overconfident, relies too much on his own strength. Needs to drink blood in order to regenerate faster. Direct sunlight will cause him to instantly combust. Formerly a drug addict.

Note: Despite being published by Vertigo comics, Preacher is not canonically part of the wider DC universe.