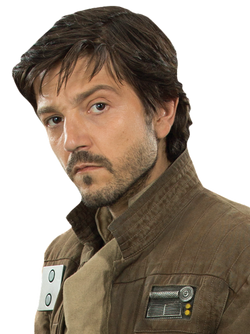 Cassian Andor Cassian Jeron Andor was a human male soldier, pilot and Intelligence officer who served in the Alliance to Restore the Republic during the Galactic Civil War. Andor joined a Rebel mission to steal the plans of the Death Star, a superweapon that was being built by the Galactic Empire

Classification: Member of The Rebellion

Attack Potency: Athlete level physically | Small Building level with blasters (Shots from his personal blaster can put down Stormtroopers in full armor. It is essentially a modular blaster rifle frame that can be stripped down to be used as a heavy blaster pistol and likely packs this kind of firepower)

Range: Dozens of meters with his modular blaster in pistol configuration, likely a few kilometres with it in heavy blaster/sniper configuration.

Standard Equipment: His modular blaster (it is normally used as a heavy blaster pistol but can, with certain attachments, be reconfigured into a long range blaster rifle)

Intelligence: Fairly High. Reprogrammed an imperial droid for the Rebellion. Is a capable soldier.

Retrieved from "https://vsbattles.fandom.com/wiki/Cassian_Andor?oldid=4108693"
Community content is available under CC-BY-SA unless otherwise noted.