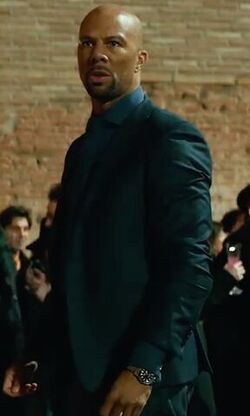 Cassian is a bodyguard who protected his ward, Gianna D'Antonio, leader of the Camorrah Crime family. After she is killed by John Wick's because of his blood oath, he hunts him down to have his revenge.

Tier: 9-B, higher with firearms

Attack Potency: Wall level (Comparable to John Wick and was nearly able to kill him), higher with firearms (John Wick guns are superior to their real world counterparts and can pierce holes in walls and even shatter skulls)

Speed: At least Athletic Human (Comparable to John) with Superhuman combat speed (Was able to react to John), Supersonic to Supersonic+ attack speed with guns

Lifting Strength: At least Athletic Human, likely Peak Human (Held his own against John in grappling)

Retrieved from "https://vsbattles.fandom.com/wiki/Cassian?oldid=6037764"
Community content is available under CC-BY-SA unless otherwise noted.