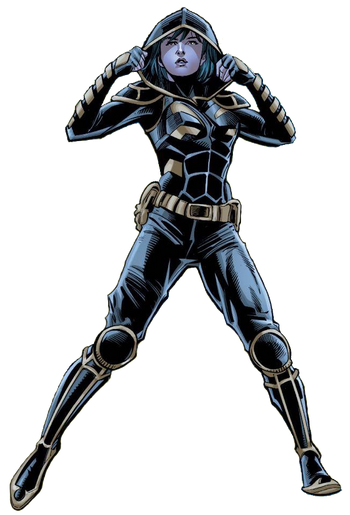 Cassandra Cain is the daughter of David Cain and Lady Shiva, two of the world's deadliest assassins. David trained Cassandra from a young age to be a human weapon. She was an experiment, designed to prove to Mother, David's superior, that trauma-induced mental desensitization could be achieved naturally, instead of through drugs and psychic manipulation. Mother rejected her.

After her first assassination mission went awry, Cass escaped her father and sought out Batman to inform him of Mother's plans. After Mother's defeat, Cassandra stayed in Gotham to fight crime there, and later became part of the team co-lead by Batman and Batwoman, which also initially consisted of Spoiler, Red Robin, and Clayface.

Age: Likely in her teens

Powers and Abilities: Superhuman Physical Characteristics, Martial Arts (Stated to be one of the best fighters on the planet, and one of the most dangerous. Held her own against both Dick Grayson and the Red Hood while holding back), Expert Marksman, Stealth Mastery (Disappeared before Dick Grayson could realize it, snuck up on Lady Shiva and disappeared before a woman could turn around) and Smoke Manipulation (Via smoke bombs)

Attack Potency: Building level+ (Batman stated that she would defeat him if they fought. Beat Lady Shiva, who bested Batman. While holding back, she easily overwhelmed Dick Grayson and kicked the Red Hood away)

Speed: Massively Hypersonic (Kept pace with Dick Grayson and the Red Hood while holding back)

Striking Strength: Building Class+ (Kicked open a padlocked door. Ripped some robots apart. Kicked a door off of its hinges)

Intelligence: Gifted. An extremely skilled martial artist superior to the likes of Nightwing, the Red Hood and even Batman and Lady Shiva. She was able to reprogram the flight plan of a ship without knowing how to read.

Weaknesses: Cassandra used to have limited speech, because as she grew up she was only taught to read body language instead of actual spoken language.