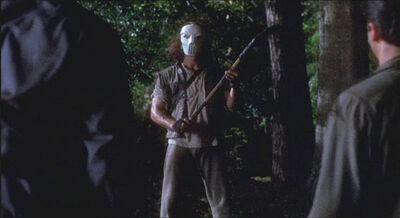 In the first film, he is portrayed by Elias Koteas. Jones was first introduced to the Turtles in an altercation with Raphael. The two of them actually fought each other in a New York City park, just after Raphael stopped some punk from stealing a woman's purse and Casey was about to beat them to a pulp for that whereupon Casey turns his aggression on Raphael. In the initial altercation, Jones used two Jose Canseco bats, which Raphael sarcastically asked if Jones in fact paid money for them, and a cricket bat to put Raphael in a garbage can.

Attack Potency: Street level (Hit Raphael with a bat hard enough to lift him off the ground and knock him several feet away from him, hit someone hard enough to make him fly several meters in the air, KOed Ninjas with a single hit)

Striking Strength: Human Class (Hit Raphael with a bat hard enough to lift him off the ground and knock him several feet away from him, KOed highly trained ninjas with a single hit)

Durability: Street level (Took a bat to the jaw that propelled him several feet in the air and got up like nothing happened)

Intelligence: A bit below average (He is mostly street smart)

Weaknesses: Bad at expressing himself, gets cocky easily