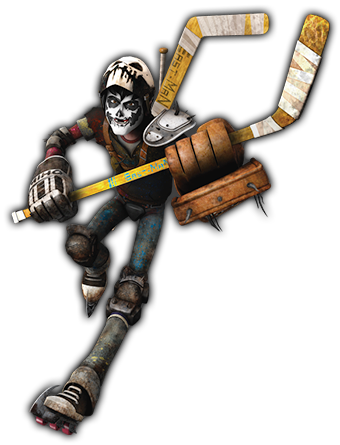 Casey Jones is a major character in Nickelodeon's 2012 CGI cartoon series Teenage Mutant Ninja Turtles. An enemy-turned-ally of the turtles, Casey is a high school student by day and vigilante by night. After an attempt at fighting thugs gone wrong, Casey is saved by Raphael, but quickly dukes it out with Raph due to his freakish mutant appearance. Through their mutual friend, April O'Neil, Casey and the Turtles become good friends, with him becoming particularly close with Raph and rivaling Donny for April's attention.

Speed: Supersonic+ (Can attack faster than the eye can track and kept up with Raphael whose attacks are similarly as fast. Comparable to the turtles, who can outpace missiles and lasers and keep up with the likes of Tiger Claw)

Lifting Strength: Class 5 (Should roughly be in the same class of strength as the Turtles, who could knock down Traag and other similarly huge mutants or robots)

Durability: Wall level (Withstood a casual attack from Rahzar, which threw him through multiple wooden crates, shattering each one of them. Took a casual hit from The Newtralizer, who is just as strong as Slash, a mutant strong enough to smash Leonardo through brick walls)

Range: Extended Melee Range, up to tens of meters with ranged attacks

Intelligence: Academically, Casey isn't particularly bright, often having to be tutored by April O'Neal and in general, Casey seems to lack "conventional smarts". However, on the field, Casey is a reasonably skilled fighter, who, while not on the same level as the Turtles, can competitively fight them on relatively equal grounds. This can be seen in his roughly equal brawls with Raph and Donny. Even before becoming friends with the Turtles and training with them, Casey was capable of members of the Purple Dragons in combat, quickly defeating them. He could even match Kraang and Foot Bots.

Weaknesses: Casey isn't as skilled as the other Turtles, yet believes himself to be and thus can be overwhelmed by the stronger mutants they may face. In general, Casey suffers from overconfidence.