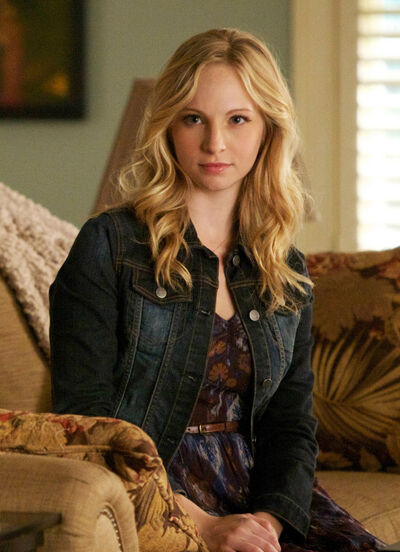 Caroline Forbes is a vampire and one of the best friends of Elena Gilbert. Early on in the show she was a human but sustained heavy injuries in a car wreck leading to her being healed by Damon but was later killed by Katherine resulting in her turning into a vampire. She has had numerous love interest with her friend Matt and Tyler but her most notable is her relationship with the Original Hybrid Niklaus. Caroline is a very loyal friend and is very sensitive and caring, despite starting out somewhat childish after becoming a vampire she began to mature into a proper woman. By the end of the show she is a fairly level-headed person with a strong sense of self and an even stronger sense of her friends.

Powers and Abilities: Superhuman Physical Characteristics, Immortality (Types 1 and 3), Regeneration (Mid-Low), Mind Compulsion (Can control an individual into doing their bidding after making eye contact), Limited Emotion Manipulation (Can compel an individual into ignoring or turning off their emotions by "compulsion"), Illusion Creation, Resistance to Empathic Manipulation (A vampire can shut off their own emotions effectively becoming an being without humanity, though a very powerful emotional shock can turn them back on), Telepathy (Can get inside the minds of individuals and look for information through physical contact), Dream Manipulation (A vampire can both produce and modify dreams, create nightmares and lucid dreaming, as well as distort an individual's perception of reality effectively trapping someone in their dream.), Resurrection (Any vampire can resurrect themselves if they were to drown or die due to oxygen deprivation, but they will die all over again if the reason they died in the first place isn't changed to something more favorable, effectively creating an endless cycle of life and death), Accelerated Development (Passive. Vampires grow stronger with age.), Corruption (Vampires are able to turn humans into vampires with their blood), Enhanced Senses, Resistance to Mind Manipulation (Vampires have been shown to have limited resistance to other vampire's compulsion and require them to be severely weakened in order for them to be manipulated)

Attack Potency: Wall level (Is stronger than Elena, has tangled with and momentarily held her own against other much older vampires like Damon Salvatore)

Speed: Subsonic (Is shown to be faster than Elena, has managed to outrun Damon on at least two separate occasions).

Intelligence: Above Average (Is an honor student often receiving nothing but straight "A's", has managed half of dozens of after school committees at the same time)

Weaknesses: Standard vampire weaknesses (Sunlight (Formally), Fire, Being stabbed with a wooden object through the heart, Decapitation, Heart extraction, Invitation, Vervain (a mystical herb/plant that will burn a vampire on contact with their skin or when ingested and can dampen or temporarily hinder their healing factor (however this can also give them near immunity to being "compelled" by other vampires, Werewolf bite (Werewolf bites act in vampires similarly to rabies in human; causing them to experience hallucinations, fever-like symptoms, and then going rabid until the venom eventually kills them)

Retrieved from "https://vsbattles.fandom.com/wiki/Caroline_Forbes?oldid=4108669"
Community content is available under CC-BY-SA unless otherwise noted.