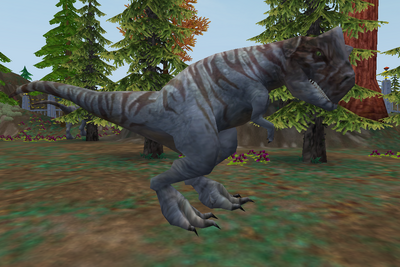 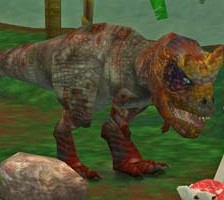 The Carnotaurus is a selectable animal in Zoo Tycoon 2, initially introduced in the Dino Danger Pack, but later revamped and re-released in the Extinct Animals expansion pack. It is one of the most aggressive and powerful animals in the game, and must be contained using specially-designed, expensive dinosaur fencing. It attacks other animals indiscriminately, and will even kill guests if outside its enclosure. As such, it's only unlockable for 3-star zoos in Challenge and Campaign modes. It resides in the Boreal Forest biome.

Lifting Strength: Superhuman to Class 10 (Capable of knocking down and killing large dinosaurs like Triceratops and Ankylosaurus)

Durability: Small Building level (Can withstand attacks from every land animal in the game, bar the Killer Penguin and Tyrannosaurus Rex)

Weaknesses: Cannot swim, and will drown in a matter of minutes in anything but shallow water.

Retrieved from "https://vsbattles.fandom.com/wiki/Carnotaurus_(Zoo_Tycoon_2)?oldid=5542324"
Community content is available under CC-BY-SA unless otherwise noted.