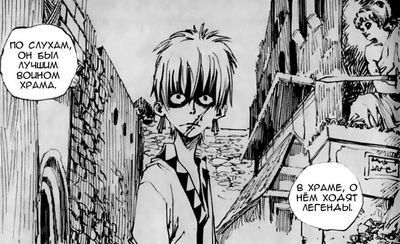 Carnival is later recruited by Mikael to be part of his personal guard, and is ultimately fatally injured by Icarus and killed by Baroona.

Carnival often battles with only one sword but will battle those who he deems as worthy adversaries with two swords. He is a ruthless skilled swordsman, who was able to kill five A-class Temple Mercenaries in the blink of an eye. Carnival was able to battle and defeat One-arm Jack and can even exchange swords with and push Mikael back.

Even though he was defeated by Mikael, Mikael wanted Carnival to be his subordinate due to his skill and blood lust.

Retrieved from "https://vsbattles.fandom.com/wiki/Carnival?oldid=4108661"
Community content is available under CC-BY-SA unless otherwise noted.