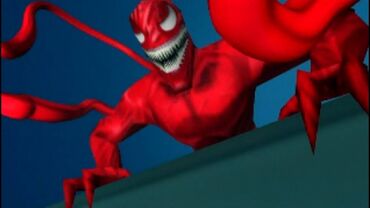 Carnage is one of the main antagonists from the Spider-Man game developed by Neversoft, Cletus Kasady is a serial killer who allies with Doc Ock. In which both spread toxic waste across New York, with Spider-Man and Venom trying to stop both of them.

Powers and Abilities: Superhuman Physical Characteristics, Acrobatics, Enhanced Senses, Extrasensory Perception, Stealth Proficiency, Shapeshifting (Carnage can morph his arms into weapons, and manifest long tentacles), Regeneration (The Carnage symbiote saved Doc Ock from being burnt to a crisp, which explains why Doc Ock survived and was locked up in prison)

Attack Potency: Small Building level (Scales to Spider-Man, defeated Venom who is strong enough to burst into a building wall, and fought equally against Venom for an unknown amount of time)

Lifting Strength: At least Class 10 (Can lift Spider-Man by grabbing both of his arms with his tentacles, Should compare if not, is superior to Venom who was able to toss away a passageway to sewers with one hand)

Striking Strength: Small Building Class (Can knock out Spider-Man with a single hit, the same effect happens with the Spidey Armour)

Stamina: Likely high (Was still on his feet after fighting Spider-Man)

Standard Equipment: Carnage can morph his hands into weapons such as a battle axe