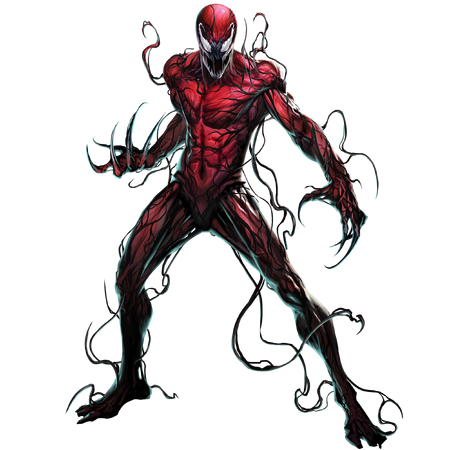 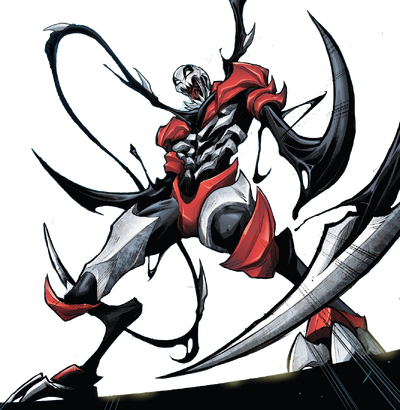 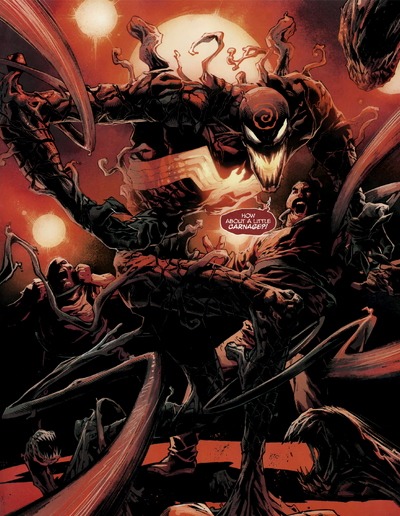 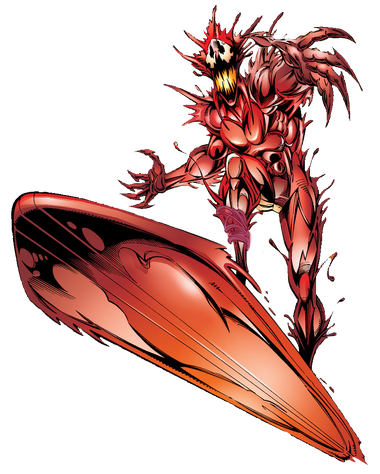 Carnage is a recurring antagonist in the Spider-Man subdivision of Marvel Comics. Originally known as Cletus Kasady, he was essentially psychotic since childhood, having murdered or tortured his family and burning down his own orphanage. By his adulthood, Kasady was a diagnosed sociopath and a serial killer, having murdered so many individuals that, when he was finally caught, he was given eleven consecutive life sentences.

Eventually, Eddie Brock was imprisoned as well and broke free shortly afterwards. However, the Venom Symbiote was pregnant at the time, and gave birth to a blood-red and black spawn known as "Carnage", which eventually bonded with Kasady, amplifying his power tremendously and allowing him to wreak havoc on New York City. Since then, Carnage has remained a consistent foe to the web-slinger to this day.

Superhuman Physical Characteristics, Regeneration (Low-High; the Symbiote is in Cletus's bloodstream and it can reform itself from a puddle of flesh or even a cell), Surface Scaling (Can adhere to and climb nearly any surface), Transformation, Body Control, Elasticity and Sizeshifting (Can restructure the Symbiote in various different ways, such as tentacles, transforming into clothes to disguise itself. Can also manipulate itself to a molecular size and back to normal size. Can sprout wings and fly), Weapon Creation, Can produce organic webbing, Flight (Carnage can grow a pair of wings and use them to fly), the Symbiote can transmit itself through technology and wiring, Absorption (Can become one with every atom of a person that he bonds with), Duplication, Limited Reactive Evolution (When Kasady was taken into space by the Sentry, the Carnage symbiote was able to save his life by growing small sacks around his mouth that converted carbon dioxide into oxygen), Mind Manipulation (By connecting one of his tendrils to someone's brain, he can screw with their mind by sharing his own thoughts and driving them insane), Madness Manipulation (Type 2), Illusion Creation (Entered Eddie Brock and put him in an illusion, which he initially believed was real and falsely spent 2 weeks on, despite far less time really happening. Claimed he could make Eddie relive every horrific nightmare and fear for a while[1]), Possession (Can spread his Symbiote to others and possess them), Immunity to earthly diseases, poisons, sound attacks, and the Spider-Sense, Resistance to Fire Manipulation (Thanks to his Darkhold augmentations, he can now resist heat as hot as re-entry which is as hot as 1650 degrees Celsius)

All abilities from base, Matter Manipulation (On a Molecular scale), and those of the Silver Surfer

Attack Potency: Large Building level+ (Stronger than both Spider-Man and Venom put together. Can damage Kaine) | Solar System level (Casually stomped the Monsters of Evil, significantly stronger than Red Goblin, Damaged the Savage Hulk who had been bonded to the Venom symbiote and took his codex and gained his strength, Cletus' strength surpasses that of the Hulk and Juggernaut; letting him easily manhandle Venom and the symbiote-augmented Norman Osborn) | Solar System level

Stamina: Very high (Likely due to his insanity, Carnage is capable of taking incredible amounts of damage without slowing down, to the point where not even being torn in half succeeded in stopping him for long) | Extremely high

Range: Standard melee range. Tens of meters with the extensions of his Symbiote. Tens of kilometers when stretched to maximum length (Managed to stretch far enough to search the entirety of New York City) | Universal

Intelligence: Carnage is a completely psychotic killer, being a diagnosed sociopath and murdering thousands or more without any rhyme or reason. In spite of this, Carnage is a very formidable combatant, outmatching Spider-Man in most of their encounters through a variety of applications of his Symbiote's amorphous structure. His murderous nature has also made him very creative, having learned nine million ways to kill an individual and allowing him to alter the Symbiote's biological structure in numerous ways (Most commonly morphing his arm into an axe)

Weaknesses: Despite being more resistant to heat than the rest of his Symbiote family, the resistance has a limit and he is still weak to significant heat due to being a Symbiote. He is also completely insane and psychotic. | Electricity | None notable

Key: Base | Dark Carnage | While possessing the Silver Surfer

Ditto (Pokémon) Ditto's Profile (Ditto is given time to transform)