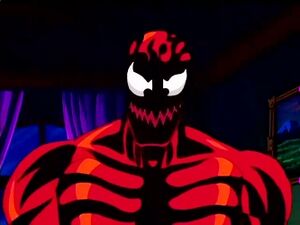 Carnage is the combination of the psychotic Cletus Kasady and the alien offspring of the Venom symbiote.

While travelling on the John Jameson Space Probe the Venom Symbiote spawned an offspring. Dormammu got his assistant Baron Mordo to divert the rocket so that it would crash on Earth returning the two symbiotes. Upon their arrival on the planet the two symbiotes attach themselves to a nearby couple.

Disguised as the young man and under the control of Mordo, the second symbiote entered into Ravencroft Institute for the Criminally Insane after the escape of the newly reformed Venom. The symbiote then removed itself from the anonymous man and joined with recently incarcerated Cletus Kasady to form Carnage, much to Kasady's joy.

Powers and Abilities: Superhuman Physical Characteristics, Immortality (Type 3 and 6), Elasticity, Enhanced Senses (His senses are far better than a human's), Surface Scaling, Regeneration (Mid-Low), Plasma Manipulation (Can shock opponents with physical touch), Transformation (The Symbiote allows Cletus to transform parts of his body, such as his arm into an axe, for example)

Attack Potency: City Block level (Can harm Spider-Man, who survived having a mountain dropped on him with ease. Comparable to Venom, who can also trade blows with Spider-Man)

Speed: Subsonic moving speeds (Can swing faster than most vehicles)

Lifting Strength: At least Class M (Comparable to Venom, who is superior to Spider-Man)

Stamina: High (Can fight his foes for extended periods of time)

Full appearance
Add a photo to this gallery