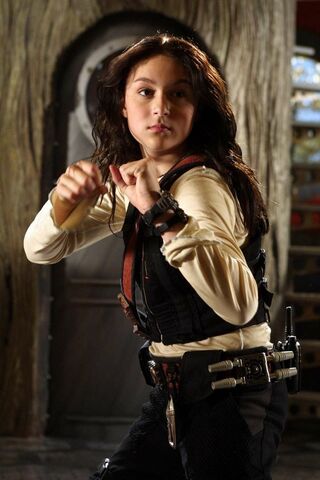 In the first Spy Kids film, Carmen and Juni fight throughout their adventure, but eventually the two siblings deepen their bond. Carmen is one of two main protagonists in the Spy Kids films along with her brother.

Attack Potency: Human level up to Street level with gadgets | Likely Wall level (should be above Cecil and Rebecca and comparable to Marissa who knocks people out with dirty diapers), potentially higher with gadgets

Durability: Human level | Likely Wall level (Should be comparable if not superior to Rebecca and Cecil who was struck with a giant second hand)

Range: Extended melee to few meters with some gadgets

Intelligence: Can hack into any organization, is the head of the Spy Kids Division

Retrieved from "https://vsbattles.fandom.com/wiki/Carmen_Cortez?oldid=5796793"
Community content is available under CC-BY-SA unless otherwise noted.