VS Battles Wiki
Register
Don't have an account?
Sign In
Advertisement
in: Characters, Humans, Adults,
and 31 more 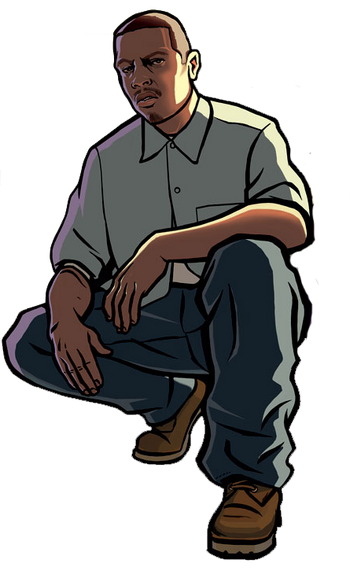 Carl Johnson is the protagonist of the 2004 video game Grand Theft Auto: San Andreas. He is easily one of the most notable (and beloved) characters in the series.

Tier: 9-B, higher with most melee weapons and with firearms, conventional explosives, and heavy weapons. 9-A with Satchel Charges and Rocket Launchers

Attack Potency: Wall level (Can easily kill an armored police officer in 2-4 hits after learning Muay Thai, and send them flying back a few meters. He can destroy cars after repeatedly hitting them. Can dent metal with his strikes, even on armored vehicles like the SWAT APC. Easily destroyed an old air conditioning unit with his bare fists. Can knockdown metal posts and fences with a few hits. Can easily destroy wooden boxes with a few hits. In the mission The Da Nang Thang, one can choose to destroy the lock while unarmed to open the container. Casually opened the door of an air-pressurized aircraft while freefalling from high altitudes in the mission Freefall and can also do this in normal gameplay. Can also kill Big Smoke in the final mission unarmed if one wishes to do so. Can also fight against and kill characters who can somewhat harm him), higher with melee weapons (Like the Katana or the Chainsaw), and with firearms, normal explosives and Heavy Weapons (Most guns can blow up cars, trucks and even military helicopters with ease, and they have no problems blowing off human limbs and pulverizing human heads. The Minigun and Flamethrower can effortlessly mow down through traffic and other reinforced military equipment), Small Building level with weapons like Satchel Charges and Rocket Launchers (Capable of destroying aircraft like the Hydra VTOL and Hunter Attack Helicopter which are based on the British Aerospace Harrier II and AH-64 Apache, and even cargo planes respectively, with just one shot. Can one-shot multiple cars at once and reduce them to charred metal. Blew up the generators of the Sherman Dam)

Speed: Superhuman (Far faster than anybody in the game. Can outrun most vehicles moving at highway speeds) with Subsonic+ combat speed and reactions (Has dodged rocket-fire and high-speed vehicles multiple times in a row. Has also consistently dodged aircraft homing missiles and even gone so far as to outmaneuver them completely with only propellor planes), higher with his jetpack (Likely 74 km/h). Subsonic with most vehicles and helicopters. Subsonic+ to Supersonic with most planes. Subsonic+ to Supersonic+ with most firearms

Lifting Strength: At least Athletic Human (Can deadlift 320 pounds, and he can bench press 320 pounds for many reps. Can casually force open aircraft doors while at high altitudes, and did so to invade a plane full of Mafia gang members)

Durability: Small Building level (Can tank about 3 point-blank rocket launcher shots and 2 point-blank Homing Launcher shots before dying. Can withstand his satchel charges exploding in his face. Can survive being run over or being rammed into walls by trains and other vehicles at top speed just fine. Can survive being burned for extended periods, upon completing the Firefighter mission, he becomes immune to ordinary fire. Also regularly withstands exploding vehicles at point-blank range. Can survive high falls, this is enhanced further after reaching his peak potential. Easily tanked a helicopter explosion that killed the rest of its inhabitants and then survived a high dive into the water soon after in the mission The Da Nang Thang. Shrugged off diving into water from the Cochrane Dam in the mission Dam and Blast, and regularly does so in normal gameplay), higher with Body Armor

Stamina: Very High (CJ can go for hours in a fight if need be, and although he does tire after excessive sprinting, swimming, or cycling, it does not impede his ability to keep endlessly fighting. After completing the Burglar missions, CJ can sprint without tiring)

Range: Standard melee range normally. Several hundreds of meters with a rocket launcher and most firearms, several kilometers with a sniper rifle

Standard Equipment: Body Armor, An arsenal of weaponry, though he is limited to one of each type, Jetpack (Obtained after missions performed for Mike Toreno)

Intelligence: Gifted (While initially a bit of a bonehead, by game's end, he was capable of outwitting his rival gangs, the US Military, the LSPD, the Mafia, and has started up & expanded a few businesses. His flying skills are incredibly impressive to the point where he can easily outmaneuver advanced homing missiles targeted directly at him with normal propellor planes alone. Usually solves his situations in professional, complex manners. Is a talented rapper)

Weaknesses: Lacks the pure ruthlessness of his fellow GTA protagonists and often shows remorse for his targets except for Pulaski, Ryder, and T-Bone Mendez; he prefers to give his opponents a second chance to redeem themselves unless he has no other choice. Will put himself in harm's way to protect his family and friends. Often finds himself in bad situations, usually due to his own mistakes. He can be naive and cowardly at times, though he overcomes this by the end of the game

Note: This details Carl Johnson assuming his physical stats and health are maxed out via usual means (within the game, without any mods or cheats or hacks), while he is wearing body armor.

Tommy Vercetti (Grand Theft Auto) Tommy's Profile (Note: Both were bloodlusted and fully equipped. However, CJ didn't get access to his jetpack)