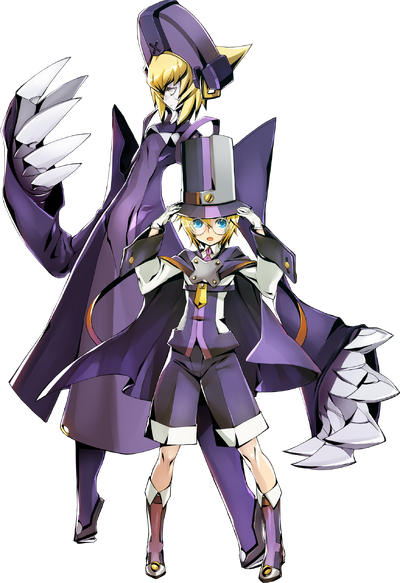 Carl Clover is a young vigilante who dropped out of the Military Academy. He is the son of Relius Clover and the current wielder of the Nox Nyctores – Deus Machina: Nirvana. He is a playable character in the BlazBlue series.

Superhuman Physical Characteristics, Weapon Mastery, Martial Arts, Ars Magus User, Limited Glyph Creation (Can create glyphs when unleashing his power), Forcefield Creation (Anyone who learned at NOL are able to create barriers), Non-Physical Interaction (Can hit Arakune and Izanami), Soul Manipulation, Healing and Regeneration Negation (Up to High-Godly; Nox Nyctores can damage the soul, negating any form of recovery, even when the reality is warped by multiversal entity, Nox Nyctores are also superior to Ars Magus, a weapon capable of killing the Black Beast, a creature that has the ability of Self Observation, which is what Terumi used to regenerate from Hakumen's Time Killer), Madness Manipulation (Nirvana induce madness in some fashion, even to the user), Clairvoyance (Was capable of seeing into the alternate realities of what happened to him), Automatic Reactions and Movements (Nox Nyctores fights, moves and warns the user on their own without any consent), Healing (Is able to heal himself with a potion), Empowerment (Nirvana feeds on bloodlust), Power Nullification (Capable of nullifying Relius' perception Hax), Energy Projection and Explosion Manipulation (Capable of creating time bombs and energy balls), Summoning (Can summon Nirvana at will), Dimensional Travel, BFR (Can send his foes to his pocket dimension with Deus Ex Machina), Aura (Produced an aura against Relius), Teleportation, Body Control, Shapeshifting, Self-Destruction, Air Manipulation (Via Burst) and Statistics Amplification (Via Overdrive)

Resistant to following: Empathic Manipulation (The Nox Nyctores can shut down the user's emotions), Body Puppetry (Unaffected by body puppetry effects of the Nox Nyctores), Paralysis Inducement (Could fight Hakumen without getting paralyzed), Transmutation (As a chosen, he's unaffected by the Embryo's effect to turn everything into seithr), Poison Manipulation, Madness Manipulation, Biological Manipulation, and Statistics Reduction (Everybody can resist Seithr to some extent which is poisonous, can induce addiction and deteriorate bodies as well as reducing the power of others), Time Manipulation (Can resist the effects of Cauldron and/or Boundary, which stops time by existing), Memory Manipulation (Can resist the effects of Cauldron and/or Boundary, which erases memories), Mind Manipulation (Able to resist the boundary/cauldron, which when entered or get closed, will result in taking infinite information, dating across beginning of time and all possibilities), Perception Manipulation (Resist the effects of Ars Magus, which nullifies senses of the user), Petrification and Gravity Manipulation (As someone with competent skills in Ars Magus, he should be able to replicate an Ars Magus barrier, which is stated to protect the user from these effects), Heat Manipulation (Is unfazed by the intense heat from a cauldron), Soul Manipulation, Healing and Regeneration Negation (up to High-Godly) and Fear Manipulation (Is capable of fighting against Ragna numerous times with the Azure, which can inflict soul damage beyond the help of a multiversal entity, and negate any form of Recovery, is also unfazed by his passive fear hax, can also shrug off blows from the Azure, which is superior in terms of regeneration negating capabilities than a Nox Nyctores, which are superior to Ars Magus, weapons that are capable of killing the Black Beast, a creature that has the ability of Self-Observation, which is what Terumi used to regenerate from Hakumen's Time Killer), Existence Erasure (Resists Cauldron/Boundary's effects, which described to be losing everything you were and everything you'll ever be), Power Nullification (Is able to use his powers despite Kushinada's Lynchpin being activated), Death Manipulation (Could resist the effect of the Immortal Breaker), Explosion Manipulation and Spatial Manipulation (Was able to withstand Bolverk, which can pierce through space), Corrosion Inducement (Resists getting corroded by the Cauldron), Technology Manipulation (Is unaffected by the effects of Seithr, which can mess with technology), and Chaos Manipulation (Resists the boundary, which turns everything into a spiraling chaos)

Attack Potency: At least Large Town level+ by himself (Shouldn't be far too below the likes of CT Noel and CS Tsubaki). Small Country level+ with Nirvana (Punched a clean hole through Ragna's chest) | At least Small Country level+, possibly Large Planet level by himself (Stronger than before. Possibly comparable to Relius). Able to ignore conventional durability with Nirvana.

Range: Tens of Meters with Nirvana, higher with projectile.

Intelligence: Extremely High. While being inferior, he is close to the intelligence of Relius Clover. Able to mess and fix Nirvana while he is in elementary.

Weaknesses: Somewhat arrogant at times. At the end of Central Fiction, he became obsessed with knowledge. 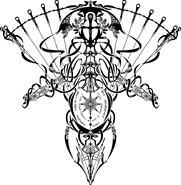 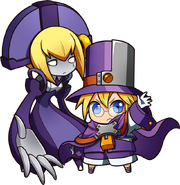 BlazBlue Continuum Shift EXTEND Soundtrack X-Matic Carl vs. Relius HQ
X-Matic, the theme of the fight between Carl and Relius

BBCP OST - X-matic II
X-Matic II, the remix of X-Matic.
Add a photo to this gallery

Retrieved from "https://vsbattles.fandom.com/wiki/Carl_Clover?oldid=5877805"
Community content is available under CC-BY-SA unless otherwise noted.