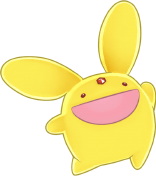 Carbuncle was originally Satan's pet, but when a young mage named Arle Nadja defeated Satan in Madou Monogatari 2, Carbuncle had been her travelling partner ever since. Despite this, Carbuncle is deceptively skilled at Puyo Puyo, having served as a hidden "final boss" in Puyo Puyo Sun and Puyo Puyo Fever.

Classification: Rabbit-like creature with a gem called the "Rublecrack."

Powers and Abilities: Superhuman Physical Characteristics, Small Size (Type 1), Magic (Is able to make use of Arle's spells such as Diacute, Brain Dumbed, Jugem, and Bayoen), Summoning (Can summon jelly-like creatures called "Puyo" and use Nuisance Puyo against opponents), Magic Reflection (Via offsets), Statistics Amplification (Like other characters, his moves get stronger with each Puyo combo. Carbuncle can also do this with Diacute), Possible Martial Arts (Is implied to know martial arts, though he doesn't use it because choosing not to and his stamina being low), Fire Manipulation (Learned from Arle), Ice Manipulation (Learned Ice Storm from Arle), Statistics Reduction (Can reduce the enemy's power via Brain Dumbed), Mind Manipulation (Via Brain Dumbed/Mind Blast), possibly Telepathy (Brain Dumbed is reportedly a telepathic spell), Flight (As seen in 15th Anniversary), Transmutation (Turned the moon into a sun), Energy Projection (Fired off an energy blast in Puyo Puyo Fever; also done with Jugem), Holy Manipulation (via Heaven Ray), Empathic Manipulation (Bayoen can impress foes), Paralysis Inducement (via Bayoen), Chromatic Manipulation (Can change the color of Puyo just by walking through them; his Super Attack in Puyo Puyo ~n is similar to Harpy's "Kawaru wa yo"), Elasticity (Can stretch himself to eat stuff such as Schezo's sword, Schezo himself, and even an entire shack. With his long tongue), Resistance to Pain Manipulation (Had endured Schezo's sword being inside him with no side effects)

Attack Potency: Unknown physically. At least Moon level, possibly Dwarf Star level with magic (Turned the moon into a sun; note that suns are stars. Casually knocked Satan out with its laser)

Stamina: High (Despite his stamina being usually low, he and Arle made their way to Satan's castle through intense heat when he enlarged the sun with his magic)

Standard Equipment: The jewel on his forehead, hammer.

Intelligence: An expert in magic despite his very limited speech. Is much smarter/cunning as he's implied to know martial arts (though he doesn't use it cause he chooses not to) and also said to be an amazing curry chef.

Weaknesses: Noticeably addicted to curry; goofs around even in battle. If his forehead jewel runs out of power, he'll die.