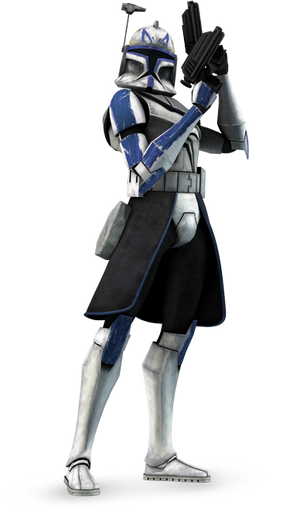 CT-7567, also known as Rex, was a veteran Clone Trooper Captain who oversaw Torrent Company of the Grand Army of the Republic's famed 501st Legion during the Clone Wars. A product of the ARC Trooper Training Regimen, he was one of the greatest soldiers in the Republic. He served alongside and developed a close bond with Jedi General Anakin Skywalker and Jedi Commander Ahsoka Tano, Anakin's Padawan. He was also good friends with Clone Marshal Commander Cody (CC-2224) and Obi-Wan Kenobi, Cody's Jedi General.

Towards the end of the Clone Wars, Rex would, along with Clone Commander Wolffe and Clone Commando Gregor, remove the inhibitor chip in his brain and disobey the infamous Order 66. He would help Ahsoka fake her death and then go on to live in peace on the planet Seelos in a modified AT-TE walker along with Wolffe and Gregor. In 3 BBY, he would join the galaxy-wide rebellion against the Galactic Empire after Ahsoka and the crew of the Ghost requested his aid.

Powers and Abilities: Peak Human Physical Characteristics, master hand-to-hand combatant, skilled with demolitions/explosives, skilled with various weapons including bladed weapons and staffs (made good use of electrostaffs during a mission to Kadavo), Flight (With jetpack), Energy Projection (With blasters), Explosion Manipulation (With thermal detanators), Electricity Manipulation (With "Droid Poppers")

Attack Potency: Wall level physically (Has taken down B1 battle droids and BX-series droid commandos in melee combat. Threw an electrostaff with enough force to pierce the torso of an obese Zygerrian all the way through in addition the backrest of his hoverchair. Can knock out Zygerrian Royal Guard soldiers, who are durable enough to stay conscious after falls of dozens of metres). Small Building level with blasters (The DC-17 heavy blaster pistol packs such firepower as do the DC-15 series blaster rifles). Large Building level+ with heavy weapons and explosives (Makes regular use of the Class-A Thermal Detonator and also the RPS-6 rocket launcher which is even more powerful)

Speed: Peak Human, possibly higher, notably faster than standard clone troopers (During the pursuit of fugitive Jedi Ahsoka Tano, Rex, as well as Commander Fox, were able to keep up consistently with Anakin Skywalker, whereas the Shock Troopers lagged a considerable distance behind) with Subsonic combat speed and reactions (Can dodge blaster fire). Likely Subsonic+ flight speed with jetpack (Can keep up with transport shuttles and slower starfighters, which tend to have top atmospheric speeds in the range of 800+ km/hr at least)

Durability: Wall level without armor (Comparable physically to Zygerrian Royal Guard soldiers, who can survive and even stay conscious after a fall of dozens of meters). Wall level with armor against physical strikes (ARC Trooper armor was lighter and offered more protection than standard clone trooper armor) and Small Building level against blasters (Armour plating made of a material which can disperse the energy of at least one or more blaster bolt hits which can result in the wearer being in pain but otherwise fine. Has, on two occasions, survived shots to the chest from military grade blaster rifles and even a sniper rifle)

Standard Equipment: During the Clone Wars, Rex wore both phase I and phase II ARC trooper armor with blue markings, and was known for having Jaig Eyes on his helmet. Rex used dual DC-17 blaster pistols in combat during the Clone Wars and continued to use them after the fall of the Republic.

Intelligence: Gifted. Rex has repeatedly proved himself to be a highly skilled and dangerous combatant. He is also a capable strategist & tactician and a leader who can complete missions by making most of the men and resources at his disposal. Furthermore, he and Cody created much of the protocols used in various fields by the Grand Army of the Republic - protocols so effective that the imperial military still used them nearly two decades later.

Weaknesses: Some PTSD from his time in the Clone Wars but otherwise nothing notable.