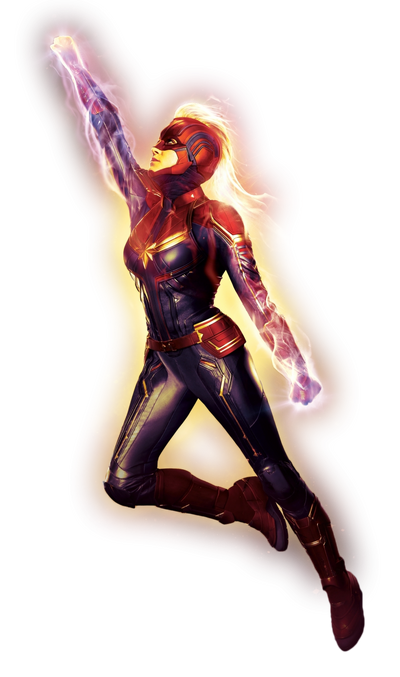 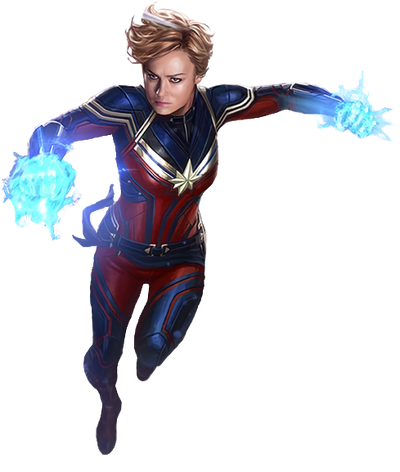 Captain Carol Susan Jane Danvers, also known as Captain Marvel, is a former United States Air Force pilot who, upon being exposed to the energy of the Tesseract, obtained cosmic powers. She was made into a Kree-Human hybrid via a blood transfusion from Yon-Rogg, while having her memories removed, turning her into the Kree's weapon and a member of Starforce. During the Kree's war with the Skrulls, Danvers returned to Earth and began recalling her past, with help from Nick Fury and Maria Rambeau. Danvers also discovered that Yon-Rogg had been manipulating her for years, learning from Talos that the Skrulls were merely seeking to find a new home. With this information, Danvers unlocked her true powers and defeated the Kree invasion onto Earth that was being led by Ronan the Accuser, before setting off out to the far reaches of the galaxy to finish what her late mentor Mar-Vell had once started.

Attack Potency: At least Building level, likely higher (Comparable to Korath. Bent a metal pole by banging a Skrull's head into it. Can bend metal bars. Her photon blasts can easily blast holes through concrete. Knocked out a Skrull who drew blood from her) | At least City level (Destroyed armored Kree ships when inexperienced. Casually put an injured Thanos in a headlock. Overpowered Thanos in a brief fight, though Thanos was already in pain for wearing the Nano Gauntlet, forcing him to use the Power Stone to defeat her).

Speed: Massively Hypersonic combat and reaction speed (Should be comparable to Korath) | At least Massively Hypersonic (Was fast enough to prevent Thanos from snapping his fingers and dodged his punches. Blitzed an injured Thanos. Intercepted Kree missiles, which were fast enough to travel from space to Earth in a few seconds. Flew to upper atmosphere in less than a minute, dodging energy blasts from Kree ships while doing so. Reckoned Thanos' planet in a very short time. Flew from upper atmosphere to New York in a few seconds. Dodged multiple shots from Sanctuary II. Dodged plasma shots from Accuser ships). Massively FTL+ flight speed in space (Can fly interstellar distances. Rescued the Benatar which was thousands of light years away overnight)

Lifting Strength: At least Class 50 (Comparable to Korath) | At least Class T, likely higher (Stopped Kree missiles with bare hands, which were as big as buildings. Put an injured Thanos in a headlock. Held Thanos' hand to prevent him from snapping and pushed him down on his knees)

Striking Strength: At least Building Class, likely higher (Easily punched through the roof of a train) | At least City Class

Durability: At least Building level, likely higher (Survived a Skrull pod exploding. Survived atmospheric re-entry and falling through the roof of Blockbuster. Withstood being beaten several times by metals that Yon-Rogg controlled telekinetically with his Magnitron Gauntlets) | At least City level (Unharmed after flying through armored Kree ships when inexperienced. She was undamaged from Thanos' headbutt. Survived being blasted by the Power Stone).

Range: Standard melee range. Kilometers with energy attacks (Her energy shockwave was as big as an Accuser Warship, which is over 4 kilometers long)

Intelligence: Above average. Is a highly skilled US pilot and was trained in combat by Yon-Rogg, being skilled enough to match and overpower Thanos in combat

Note: Don't scale Captain Marvel from the Kree shown in Agents of S.H.I.E.L.D. as they were from a separate continuity