VS Battles Wiki
Register
Don't have an account?
Sign In
Advertisement
in: Unknown Tier, Tier 8, Tier 6,
and 71 more 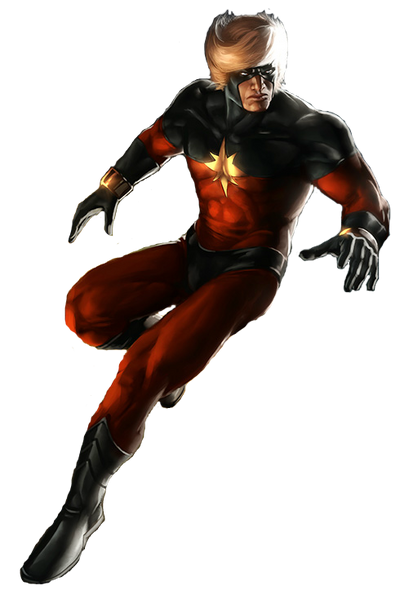 Captain Mar-Vell was a member of the Kree, the alien humanoid warrior race which has forged an empire throughout the galaxy known as the Large Magellanic Cloud. More specifically, he was one of the so-called "Pink Kree." This Kree race has the same color skin as Caucasian Earth humans, to whom those Kree who belong to it are more biologically similar than blue Kree are. As such he was chosen to act as a spy in his mission to conquer Earth, taking on the identity of the deceased Dr. Walter Lawson, however Earth and its denizens changed his views as he left the Kree Empire to be one of the Earth's greatest defenders, the original Captain Marvel

Superhuman Physical Characteristics, Genius Intelligence, Martial Arts and Weapon Mastery (Received Kree military training), Expert Pilot, Acrobatics (As shown here), Enhanced Senses (Can see a spaceship invisible to human eye[1]), Limited Resurrection and Fusionism (Can give his lifeforce to a dead person, fusing both of them together)

Superhuman Physical Characteristics, Genius Intelligence, Martial Arts and Weapon Mastery, Expert Pilot, Acrobatics, Enhanced Senses, Flight, Self-Sustenance (Type 1), Energy Projection (As shown here), Solar Energy Absorption, Statistics Amplification (His strength can be increased depending upon the levels of photonic energies absorbed prior), Cloth Manipulation (As shown here), Cosmic Awareness (As shown here), Limited Telepathy (Can communicate his thoughts to beings by temporarily merging their minds on the cosmic plane), Analytical Prediction (Using information gathered through cosmic awareness), Self-Perception Manipulation (Time slows down when he activates his cosmic awareness), Self-Destruction (Using his own lifeforce, can release a devastating blasts around himself that was able to disintegrate comparable beings into nothingness over a large radius) and Resistance to Disease Manipulation (Stopped Blackend from affecting himself for years, albeit it couldn't resist the effects of its further mutations)

Limited Teleportation (Using Nega-Bands; Can swap places with Rick Jones between the Negative Zone and the normal world), Blinding Flashes (Upon teleportation; described as "hunnert" flashbulbs going off as once), Multiple Selves (Type 1; As shown here) and Healing (Mid-Low) (By drawing life force from Rick Jones)

Attack Potency: Unknown (Lacks valid physical feats. Harmed the Vision with his blasters) | Building level (Comparable to Iron Man Model 3, which in turn is comparable to the Mandarin), far higher with the Lasonic Disintegrator (Even a blast with extremely low settings was able to severely damage Iron Man) | Varies (His strength can be increased depending upon the levels of photonic energies absorbed prior) , usually Large Island level (Can trade hits with The Thing and Super Skrull. Matched Annihilus for a brief period), up to Solar System level (Could trade hits with Thor)

Lifting Strength: Superhuman (Lifted and tossed around a steel girder effortlessly[2]) | At least Class 1 (Broke through metal constraints with ease) | Varies, up to Class T (Comparable to The Thing)

Stamina: Can remain in combat despite being heavily injured, for extended periods of time

Intelligence: Extraordinary Genius (Modified his own wrist blasters and jet-belt to be more compact and powerful, and noted by expert Earth scientists to use sciences and mathematics they themselves could barely grasp)

Weaknesses: Powerless without his armor[4] and requires it to breathe on Earth, otherwise needing breathing potions to last an hour[3] | Cannot see where he may be going when teleporting | Cannot sustain existing in the Real World for more than 3 hours when linked to Rick Jones, and extended use of Nega-Bands may merge their minds (Both formerly) By the end of his life, couldn't survive for more than a few hours without his Nega-Bands

Key: Original | Powered by Zo | Protector of the Universe