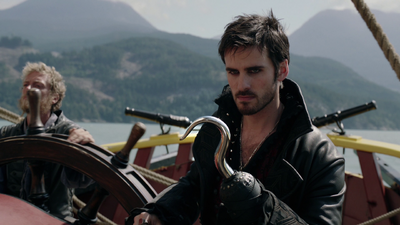 Killian Jones, better known as Captain Hook and briefly as the Dark One, is a main character on Once Upon a Time, and a former major antagonist. He serves as the secondary antagonist of Season 2 (along with Regina Mills), an anti-hero/protagonist in Seasons 3 and 4, a hidden major antagonist in the first half of Season 5 (while possessed by The Darkness) and an anti-hero/protagonist once again in Season 6.

Powers and Abilities: Swordsmanship, Poison Manipulation (Poisoned his hook to attack Mr. Gold), Resistance to Sleep Inducement, Portal Creation with magic beans and kraken's blood, Heart Extraction via potion (Enchanted his hook to be able to rip-out Cora's and Zelena's hearts), Broadway Force | All previous powers (except for Broadway Force, and he is also resistant to it - as the Dark One does not sing), Superhuman Physical Characteristics, Immortality (Types 1, 2, and 8, reliant on Excalibur), Life Manipulation, Shapeshifting, Teleportation, Clairvoyance, Hellfire Manipulation, Soul Possession, Transmutation, Healing (Mid, if scaled to Rumplestiltskin), Petrification, Heart Extraction (Can magically penetrate a person's chest and literally remove the hearts of other living beings without killing them and use them to control the owner, kill them by crushing the heart), Resurrection (If Hook dies without having passed the title of Dark One to another being, Hook can be resurrected by the Vault of the Dark One, if another person decides to open it, giving up his/her life as a result), Soul Manipulation (Can affect souls and even remove them from bodies they are possessing), Matter Manipulation, Power Nullification (Can nullify someone's capacity of hurting, making this person's powers useless), Regeneration (Low-High, if scaled to Rumplestiltskin), Technopathy, Extrasensory Perception, Summons, Memory Manipulation, Mind Manipulation, Enchanting Objects, Resistance to Matter Manipulation

Attack Potency: Athlete level physically. Street level with swords, pistols, and his hook | At least Street level physically (Dark Ones are much stronger than humans). At least City level, likely Large Country level with magic (As the Dark One, should be stronger than Jafar. Defeated Regina. Although he was weaker than Emma when she was the Dark One, he should be at least comparable to Ingrid). At least Large Country level with Excalibur.

Speed: Subsonic (Comparable to Charming). Supersonic attack speed with pistol | At least Subsonic+ (Should be comparable to Nimue)

Durability: Small Building level (Took hits from Mr. Gold even after being ran over, albeit easily defeated by Charming. Has survived casual telekinetic blasts from sorcerers on occasion) | Likely Multi-City Block level physically (At least comparable to Ingrid. Is likely the weakest Dark One in the series). At least City level, likely Large Country level with shields and protective charms (Superior to Zelena and likely comparable to Ingrid)

Stamina: Average | Extremely high (The power of the Darkness keeps the Dark One energized and thus they don't need sleep and don't suffer from sleep deprivation)

Range: Several meters with his sword and pistol | Planetary with teleportation

Intelligence: Above average | High (He had an extremely high knowledge and understanding of spells, potions, and other topics related to magic, allowing her to do impossible things for common magic users)

Weaknesses: He hasn't got a hand | Laws of Magic (Like anyone, Hook is subject to the laws of magic, as a result he is unable to raise the dead, create love, and time travel), Squid Ink (Like all magical beings, he can be immobilized by squid ink)

Key: Base Form | As the Dark One