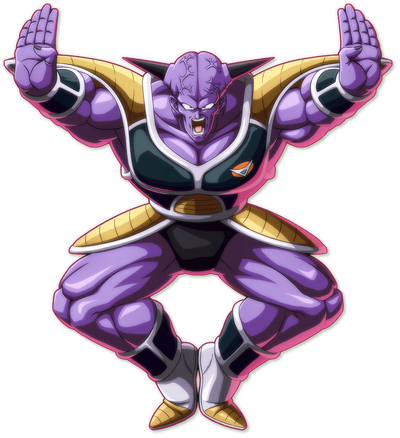 Captain Ginyu (ギニュー) was the leading member of an elite mercenary platoon, the eponymous Ginyu Force. He was killed by Vegeta after swapping body with Tagoma in Resurrection of F Saga.

Powers and Abilities: Superhuman Physical Characteristics, Acrobatics, Martial Arts, Flight, Ki Manipulation (Can be used defensively and offensively, to strengthen his skin or to fire ki blasts, which can home in on targets and form defensive barriers), Telekinesis, Soul Exchange, Ki Sensing via scouter, Possibly Sound Manipulation and Portal Creation (With Tagoma's Body. Any character equal to or stronger than Buu Saga top tiers can perform the Vice Shout with sheer power), Resistance to Cold and Radiations

Attack Potency: At least Planet level (Superior to Saiyan Saga Vegeta, Dodoria, Zarbon, and the rest of the Ginyu Force by a very significant margin) | Planet level (Comparable to Goku's base power due to his inability to utilize Kaio-Ken) | Below Average level (Got his body swapped into a tiny frog by Goku) | Solar System level (Had Tagoma's body, and was said to have powered up even further than Tagoma)

Speed: Relativistic+ | Relativistic | Below Average Human | At least FTL+ (Should be faster than Tagoma)

Stamina: High. Unknown as a Frog

Weaknesses: Originally, he had trouble effectively using the power of a body he has stolen

Woody (Toy Story) Woody's Profile (Tony was in the Namekian Frog's Body, and speed was equalized)