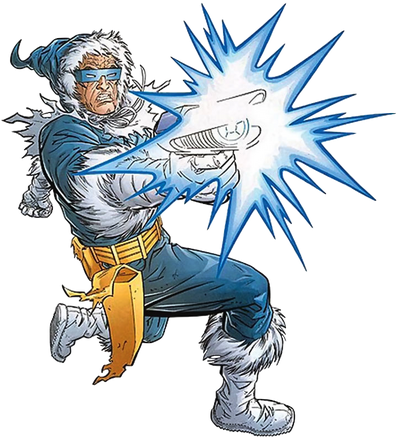 Captain Cold (Leonard Snart) is a fictional supervillain/antihero appearing in American Comic Books published by DC Comics. Captain Cold is the leader of the Rogues, a loose criminal association, as well as the older brother of Golden Glider. An acquaintance of the various superheroes known as the Flash, he has served as a bitter enemy to Barry Allen, both enemy and grudging friend to Wally West, and one of the regretting killers of Bart Allen. As part of 2011's The New 52 reboot, Captain Cold is a villain that with his team The Rogues lives by a code to never kill and sometimes can be perceived as a hero.

Tier: 9-B, higher with Cold Gun

Speed: Subsonic (Took out 10 armed men before they could blink)

Standard Equipment: Cold Gun, ice grenade, snow goggles that protect him from the flare of gunfire

Intelligence: At least Genius (He's a skilled marksman, and he created his cold gun from a cyclotron specifically to counteract the Flash's speed. Mr. Freeze has admitted that Captain Cold's freezing technology is beyond his own.)