VS Battles Wiki
Register
Don't have an account?
Sign In
in: Tier 9, Male Characters, Ice Users,
and 17 more 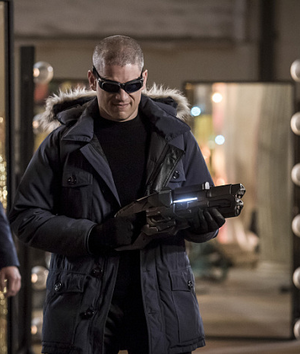 Leonard Snart is a criminal from Central City and both nemesis and occasional ally of the meta-human hero The Flash. His partner in crime and closest thing to a best friend Mick Rory has been with him for year in thefts of all degree. After several encounters with the Flash he was sought by the time traveler Rip Hunter to join the Legends team in order to defeat the immortal Vandal Savage.

Attack Potency: Wall level (Comparable to his partner Heatwave, has knocked him out in a fight), his Cold Gun ignores conventional durability with Absolute Zero temperature

Speed: Supersonic (Can keep up with the likes of his partner and other members of the Legends. Has tagged the Flash numerous times in Season 1 with his Cold Gun)

Intelligence: Gifted (Leonard's most noticeable and dangerous trait was his high intelligence. He is a master planner as he repeatedly develops plans that he pulled off with great success. Leonard's tactics are based on exact timing, acute precision, and preparation as he would often spend his time studying every detail of his target. His partner Mick, has stated that Snart is usually counting the very seconds on the clock so his plans will go off without a hitch. He's even considered a big threat to meta-humans like the Flash. Leonard has shown considerable knowledge in subjects such as biology and engineering. He also hads shown exceptional instincts that is considered to be almost like a "sixth sense," he was able to tell when something bad was about to happen just through a bad feeling he gets), Is able to take apart and put back together the Cold Gun built by Cisco, and once even knew just by looking at and feeling the weight of the gun that Cisco had removed a crucial internal component that allowed the gun to fire)