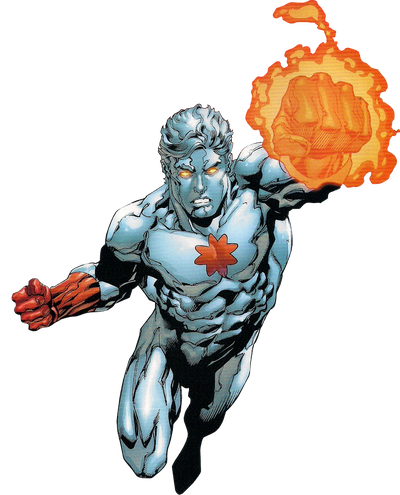 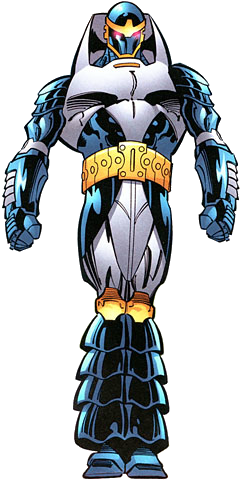 Nathaniel Adam was a captain in the USAF, court-martialled for a crime he didn't commit. He was given a choice: a death sentence, or participation in a potentially fatal experiment sitting at ground zero of a nuclear explosion encased in an alien metal, in the hope of testing the metal's properties. Survival would mean freedom. Nathaniel chose the experiment. The explosion didn't kill him; what it did do was bond the alien metal to his flesh, giving him superpowers, and throwing him twenty-odd years forward into the present day. He found himself able to access the 'Quantum Field' that underpins reality to produce a variety of effects.

Where Captain Atom diverged was that Nathaniel had been a member of military intelligence, and was pressed once more into service for them as a deep-cover agent, as the new government refused to fulfill the promise of the previous government. His cover identity was that of a superhero, the Charlton adventures presented as his fake backstory, but in reality, he was working for the government. The course of the ongoing saw Nathaniel try to discover the truth behind his original frame-up, attempt to establish his freedom from his superiors, and slowly become the hero he pretended to be. He also joined up with Justice League International, initially as an agent, but going on to serve as a hero.

Attack Potency: Solar System level (He is comparable to other high-tier DC Comics superheroes) | Universe level+ (Can cause a new Big Bang, created a universe within the Quantum Field and later destroyed it) | Low Multiverse level (Stronger than an Unrestricted Atom. Fought with Superboy-Prime. Easily defeated the Captain Atom Brigade, a team composed by multiple versions of Atom, before absorbing them. Created an explosion powerful enough to destroy a universal space-time continuum)

Lifting Strength: Class T+ (It was stated that he is strong enough to move around mountains), probably much higher | Unknown | Unknown

Stamina: Extremely High. He has not been shown to ever be exhausted at all.

Standard Equipment: His special armor, and the Quantum Field. | Monarch Armor (The updated Monarch armor worn by Captain Atom throughout Countdown, contains a "nanoweave" designed to contain radiation leaking from a breach in his chest. It also contained instruments for monitoring his vital signs, through a direct neural interface)

Intelligence: In addition to his superhuman abilities, Nathaniel Adam is also an experienced United States Air Force pilot. It is notable that he is one of the few superheroes with a "Captain" appellation that corresponds to a military rank he has actually held. He is especially skilled in combat piloting and is also trained in military weaponry, strategy, and hand-to-hand combat. Adam also has strong survival instincts derived from his experiences during the Vietnam War.

Weaknesses: If Atom absorbs too much energy at once, he will be sent hurtling through time. Depending on the type of energy absorbed, he either goes forward or backwards | If his Armor get breached it can accidentaly release enough energy to destroy an entire Universal space-time continuum

Big Bang
Add a photo to this gallery