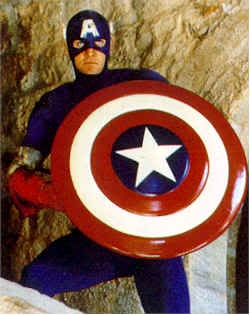 Steve Rogers was a weak and frail man who was excluded from the draft because of his polio. He volunteered for a government experiment and was given a formula created by Dr. Vaselli which successfully transformed him into a Super-Soldier at the peak of human development, but before any more Super-Soldiers could be created Dr. Vaselli was murdered by a Nazi spy and the secrets of the process were lost. In Italy the Red Skull was planning to launch a missile at the White House. Steve Rogers, now known as Captain America, was sent in to defeat the Red Skull and stop the missile launch.

Captain America entered the launch compound, but after an initial fight the Red Skull defeated him and then tied him to the missile. Captain America was able to grab a hold of the Red Skull, forcing him to cut off his own hand to avoid being launched. While the missile was over Washington, D.C., a young boy named Thomas Kimball, who would grow up to be the President, took a photograph as Captain America forced the missile to change course and land somewhere in Alaska, where he remained frozen until 1990.

Tier: 9-B, higher with shield

Age: At least in his 60s chronologically, likely in his late 20s biologically in 1990

Attack Potency: Wall level (Was able to break steel cuffs. Smashed through a wall with a hand-drying machine, although the wall was already cracked beforehand), higher with shield (Collapsed a tower)

Speed: At least Peak Human (Should be faster than the average human), possibly higher (Outran a car, although a normal human was able to outrun said car, although the latter might be an example of Plot-Induced Stupidity)

Lifting Strength: Possibly Class 10 (Possibly pulled a truck, but the scene was unclear)

Durability: Wall level (His suit is bullet-proof), higher with shield