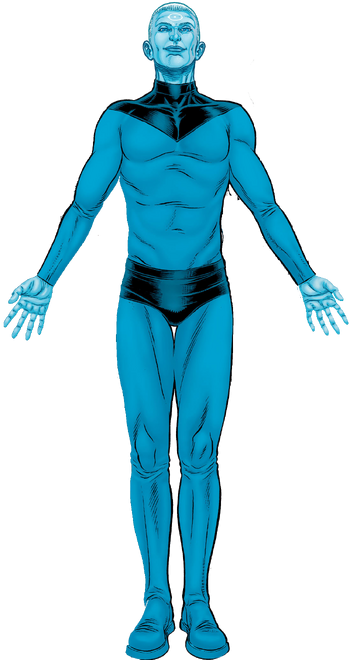 Captain Allen Adam is Captain Atom, the Quantum Superman of Earth 4. Originally an ordinary man, and a member of the United States Air Force, until exposure to an experimental uranium engine exploding obliterated his mortal form, leaving him as a disembodied mind with a newfound quantum awareness of reality. Eventually, he built himself a new, ideal body, and retained his new, almost godlike powers.

However, Adam's quantum senses soon overwhelmed him, and he became afraid of his progressive loss of his humanity. Thus, he started taking retardant drugs, hoping to dampen the extent of his abilities.

Age: Originally a human in his 30s, now beyond Time itself

Attack Potency: At least Complex Multiverse level (Can perceive and manipulate reality on at least an 8-dimensional level)

Intelligence: Nigh-Omniscient (Perceives all of time simultaneously, and is capable of reading the minds of everyone. Understands the fundamental nature of the multiverse and can connect himself with The Overvoid)

Weaknesses: His powers make him lose his humanity and empathy