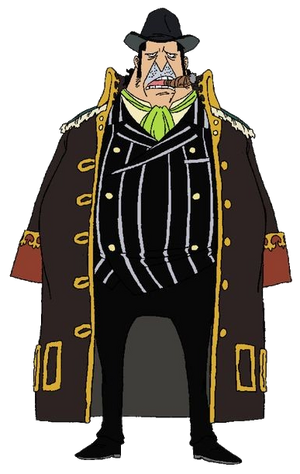 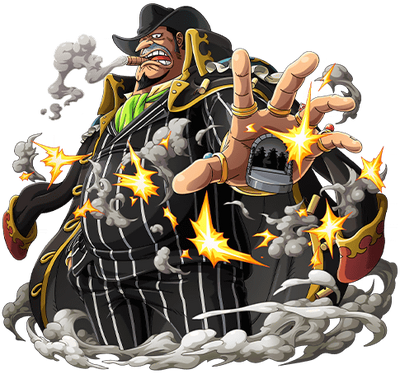 Coming from the West Blue, Capone "Gang" Bege is one of twelve pirates who are referred to as the "Worst Generation" and also the captain of the Firetank Pirates. Once a powerful Mafia boss in his native Blue, he became bored with his dominance of the underworld and decided to head out to sea to conquer and loot as many powerful pirate crews as he can. He's rather infamous for his sadism, high class attitude, and very short temper. However, his most prominent attribute is his direct approach to victory. Bege is a cunning and crafty opportunist who always goes after the head honchos and no one else, just to enjoy watching their organizations dissolve into chaos after he knocks off the boss.

He has eaten the Castle-Castle Fruit (Shiro Shiro no Mi); his body is a medieval-style human castle (including horses and mounted cannons and all) and his crew (and anyone) can shrink and "enter" him to mount surprise attacks on enemies, and he can interact with them through a manifestation of his conscious self. If that's not enough, he can assume the literal form of a castle human and beef himself up with impressive offense and defense, but if his castle body sustains any harm in that state, his consciousness feels it as well.

He also allied himself with the Big Mom Pirates during the two year time-skip, serving as a "Rook" combatant in her ranks and marrying one of her daughters to seal his servitude, Charlotte Chiffon. Through her, he now has a son, Capone Pez, making him the only known Supernova so far who has his actual family alongside him as he operates his crew. However, his loyalties to Big Mom is in reality a ruse as Bege joined the Big Mom Pirates simply to find a chance to assassinate the Yonko herself. Bege formed a temporary alliance with the Straw Hat Pirates in order to do so. After the plan failed, Bege effectively became an enemy of the Yonko and her crew.

Tier: Unknown, 7-A with firearms

Powers and Abilities: Superhuman Physical Characteristics, Body Control (His body to be a living fortress that can store people and actively makes weapons in traps inside), Size Manipulation (Anything entering his body becomes tiny), Transformation (Can turn into a tank or a castle), Expert Marksman, Statistics Amplification (Durability via Big Father) and Minor Pocket Reality Manipulation (Can control the castle inside of his body at will), Large Size (Type 2, as Big Father: 80m)

Durability: Unknown, at least Large Mountain level with Big Father (Able to withstand several punches from Big Mom but not without damage)

Range: Kilometers with projectiles (Sniped Charlotte Oven from the sea with a flint-lock pistol)

Intelligence: High and accomplished and battle hardened fighter (Bege is a masterful strategist who uses tactics and trickery, rather than direct physical force in battle. He is a deceptive master of bluffing, as he was able to easily coerce Caesar Clown)

Weaknesses: Standard Devil Fruit users weaknesses. If his "Rook: Ein Vater Grosser" form gets destroyed, he dies and he can't move around to avoid the attacks

Shiro Shiro no Mi (Castle Castle Fruit): His insides also appear to that of a literal fortress, featuring stone brick rooms as well as drawbridges that can open and close, again putting into question whether Bege creates them at will or that his body truly does function like a fortress and has people run around his body at all times. When the objects and people within him reach a certain distance away from his body, shown by a pinkish layer of an unknown aura centered on Bege's location, they revert to full size as well as their real speed, resulting in large cannon volleys and cavalry seemingly popping out of nowhere from one man.

Note: This profile covers only the feats done until the Wano arc, skipping the Pre-Timeskip events due to the lack of feats Bege had at the time.