VS Battles Wiki
Register
Don't have an account?
Sign In
Advertisement
in: Characters, Saint Seiya, Gold Saints,
and 14 more 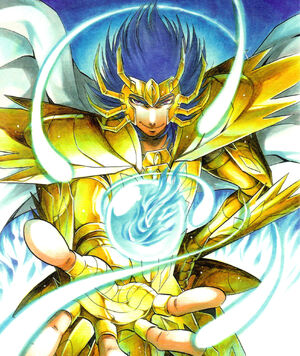 Powers and Abilities: Superhuman Physical Characteristics, Skilled warrior, 7th and 8th sense user, Can counter or nullify any technique after seeing it being used once, Flight, Telepathy, Telekinesis, Atomic Manipulation and Destruction (Can bypass durability by hitting the atoms of the opponent), Can travel and cross dimensions, Energy Blasts, Forcefields, Higher senses to track people and events over large distances and possibly through dimensions, Can attack non-physical beings, Can remove the senses of others.

Attack Potency: At least Galaxy level, Universe level+ when burning his 7th sense to the utmost limit (One of the most powerful Gold Saints of his generation, and was going to be Pope Sage's successor. Fought against Thanatos and drew blood from the god, though Thanatos was inhabiting a weak host)

Striking Strength: At least Galactic, Universal+ when burning his 7th sense to the utmost limit

Durability: At least Galaxy level, Universe level+ when burning his 7th sense to the utmost limit with Cancer Gold Cloth

Stamina: Nearly limitless (Gold Saints are stated to be able to fight for a thousand days)

Weaknesses: Not as durable without his cloth.