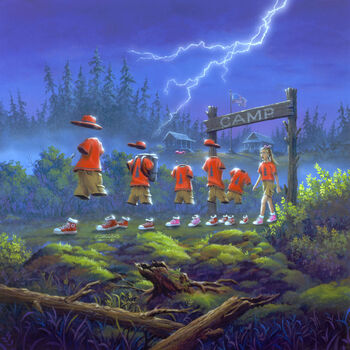 A long time ago, a dark fog descended over Camp Spirit Moon. This fog turned all of the camp's residents into ghosts. Now, if any members of the camp try to leave, they will dissipate into the fog that turned them into ghosts. The ghosts need to possess a human body in order to escape.

When Harry and Alex Altman attend the camp, they begin noticing very strange things. The other members of the camp seem to be constantly trying to scare them. When the boys find out that the other camp members are ghosts, they attempt to run away, but the other members of the camp try to stop them and possess them. However, all of the ghosts begin fighting over who will get possess the boys. As the ghosts fight, they begin blending together into a smokey mist.

Powers and Abilities: Superhuman Physical Characteristics, Possession, Non-Corporeal (Are ghosts), Illusion Creation (Somehow made a giant worm monster that turned out to be a trick created by them and it shook the ground surrounding it), Protoplasm Creation (Only when they reappear), possibly Self-Resurrection (When they "disappeared" due to a supernatural fog that originally killed them they came back shortly after), Regeneration (Mid) (When a girl named Lucy lost her head she was seen with her head back only moments later), Immortality (Types 2, 3, 4, 6 and 7), Levitation, Resistance to Pain (Shown no signs of pain when fatal injuries have been conflicted onto them, such as stabbing themselves in the throat with a fork and a pole going through their foot) and Fire (One of them stuck their hand in a campfire to retrieve a hotdog and the only thing that was even remotely damaged was the hotdog)

Stamina: Very High (Can still operate without their heads or stabbed in the throat)

Weaknesses: Are trapped in Camp Spirit Moon unless they possess someone living, can be temporarily vanished when they come in contact with supernatural fog, unlike regular ghosts they are physically there and don't possess Intangibilty

Retrieved from "https://vsbattles.fandom.com/wiki/Camp_Spirit_Moon_Residence_(Goosebumps)?oldid=5746948"
Community content is available under CC-BY-SA unless otherwise noted.