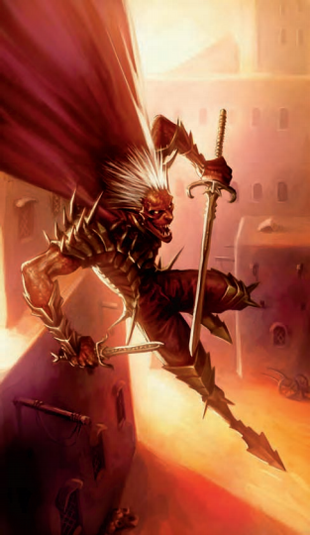 Cambions are the spawn of demons mating with humans, generally between a succubus (or an incubus) as well as a mortal being. The result is a demi-fiend, something not wholly one or the other. Many such Cambions result from demon lords themselves, especially Graz'zt, who commonly partakes of earthly flesh.

Cambions often serve as guides and scholars of the planes since they are largely shunned by their own societies, though they gather to themselves masses of lesser devils and gangs of humans. It is said Cambions become so vile, wicked, and truly evil that as adults no mortal, regardless of how devout or pious, could possibly feel anything other than resentment.

Origin: Dungeons and Dragons (Expedition to the Demonweb Pits)

Age: Varies, though they are classified as immortal

Powers and Abilities: Superhuman Physical Characteristics, Abstract Existence (Type 1, As outsiders, Demons are purely abstract in their physiology, only maintaining an illusion of fleshy existence), Chaos Manipulation/Law Manipulation (Demons play into the multiversal balance of Chaos and Law; they are formed from Chaos and their mere presence raises levels of ambient chaos, thus causing chaotic effects to take place. With enough of an upset balance, entire planes of existence can be sent careening into the Abyss), BFR (Anything a demon eats is sent to the Abyss), Fear Manipulation, Memory Manipulation (The insides of demons generate "blood", a black viscous material that, when it comes into contact with an enemy, induces supernatural fear and short term memory loss), Corruption (Type 1, 2, and 3), Soul Manipulation (Demonic interaction rends the soul and corrupts the flesh), Immortality (Type 1), Blood Manipulation (Blood spontaneously appears in the presence of demons, oozing from walls and filling structures), Spatial Manipulation (Mazes conjure spontaneously in the presence of Demons, buildings can possess larger insides than outsiders permit), Weather Manipulation (Weather is affected by the Chaotic upset of a demon's presence, causing effects such as blizzards in the middle of summer or earthquakes away from fault lines), Power Modification (Demons cause magical powers to become slightly modified in their presence, giving them a sickly, corrupted look), Death Manipulation (Plants and animals die for inexplicable reasons when in the same biome as a demon), Disease Manipulation (Creatures of good or lawful alignments may become sickened or ill at ease when in a Demon's presence), Animal Manipulation, Biological Manipulation (A demon can warp the creatures in the area into dire forms of itself, becoming stronger and meaner), Possession (Demons of even lower stature can possess enemies to take control of them), Non-Corporeal (Demons become insubstantial wisps whilst attempting to possess enemies, being unable to be touched even by other spiritual creatures), Astral Projection (Demons can project freely onto the Astral Plane), Mind Manipulation (Demons possessing a foe can take over their minds), Sense Manipulation (Aside from the target's mind, a demon can hijack a target's senses), Transformation (Possessed creatures can have their physiologies altered into those of demons over a course of days), Curse Manipulation and Statistics Reduction (Demons who take the role of a Corrupter Demon can, upon possessing a target or object, bestow curses with a touch, inducing severely reduced stats and capabilities), Power Bestowal (An Enhancer demon can bestow abilities upon an object it possesses, making it far stronger with various magical effects), Telepathy (All demon types maintain telepathy), Shapeshifting (Can assume any humanoid form they please), Flight, Dimensional Travel via Plane Shift, Weapon Mastery, Social Influencing (Even seeing a Cambion is enough for a target to be charmed), Fire Manipulation via Fire Ray, Invisibility, Illusion Creation (Can create an illusory double of itself), Poison Manipulation (Carrion Crawler Brain Juice), Sound Manipulation via Silent Metal (Dampens the sounds of drawing weapons and the like), Morality Manipulation (The strikes of a Cambion are aligned with Chaos and Evil, and pierce the defenses of Lawful and Good creatures), Extreme Resistance to Magic, Reality Warping, Holy Manipulation, Electricity Manipulation, Poison Manipulation, Acid Manipulation, Fire Manipulation, and Ice Manipulation

Attack Potency: At least Small Building level (The weakest Cambions are comparable to casters capable of casting Fireball), possibly far higher (Certain Cambions have reached astounding positions in life- these include Iuz the Old, a Demigod, and Acererak, a lich follower of Vecna who could ascend to godhood but refuses to do so)

Stamina: Infinte, Outsiders require no rest or food to sustain themselves

Standard Equipment: Various magical artifacts, and often make use of a weapon of their choosing (often a spear)

Intelligence: Gifted, most maintain vastly higher than average human intelligence, though many reach into Extraordinary Genius levels and beyond

Retrieved from "https://vsbattles.fandom.com/wiki/Cambion?oldid=5878384"
Community content is available under CC-BY-SA unless otherwise noted.