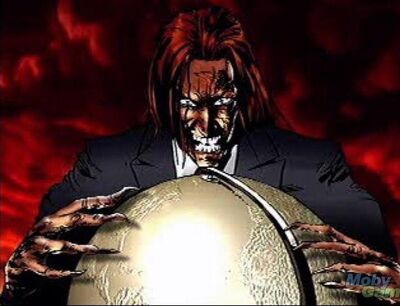 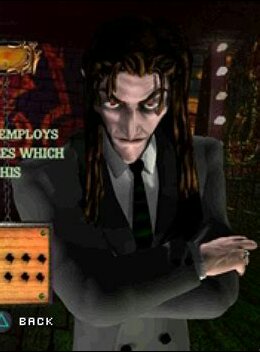 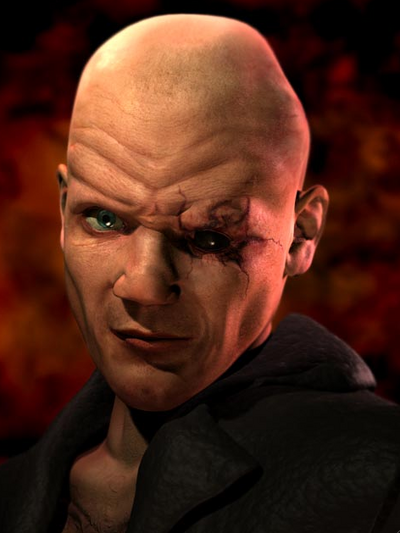 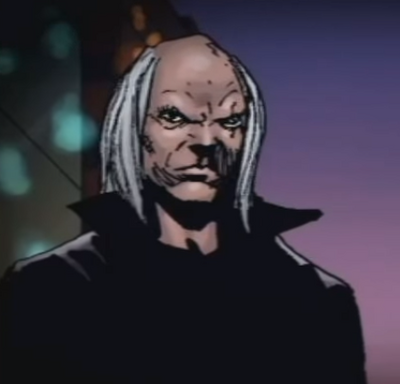 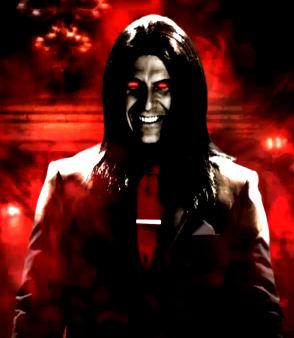 Calypso is the orchestrator of the Twisted Metal contest and the recurring antagonist of the Twisted Metal series. At the end of every contest, he allows the victor to request a single, solitary wish of their choosing, regardless of how ludicrous or seemingly impossible the wish in question may be. Despite his promises, however, his intentions are genuinely cruel and sadistic, with his approach towards granting each victor's wish almost always leading to the recipient's suffering.

Alongside Needles Kane and Mr. Grimm, Calypso is one of the only characters to have appeared in every installment of Twisted Metal thus far, and is the only character in the franchise to retain the same general personality in each game despite the series' ever-changing story and setting.

Classification: Unknown, formerly human (depending on the incarnation)

Powers and Abilities: Superhuman Physical Characteristics, Enhanced Senses (can see the inside of a person's body if he so desires), Genius Intelligence, Weapon Mastery, possible Weather Manipulation (implied to have created the series' ENV weapons, a few of which have been capable of calling down lightning bolts and summoning tornadoes), Plant Manipulation, Teleportation, Telepathy (Can speak to people in their minds, even after sending them across time), Reality Warping, Size Manipulation, Large Size (Type 5 [Via Size Manipulation]), Summoning, Sound Manipulation, Implied Shapeshifting, Illusion Creation (Created an illusion of a pinewood forest to fool Marcus Kane after teleporting him to a mental hospital), Electricity Manipulation, Portal Creation, Resurrection (Of others), Transmutation, Statistics Amplification, Time Travel, Time Manipulation, Empathic Manipulation, Morality Manipulation, Age Manipulation, Soul Manipulation, Non-Corporeality Negation (Turned Simon Whittlebone's ghost mortal again), Causality Manipulation, Acausality (Type 1), Power Absorption/Transfer, Possession (Can switch bodies with other people), Technology Manipulation (With his powers, upgraded Cousin Eddy's RV into a more technologically advanced one. Granted Amanda Watts' dragster the ability to drive at the speed of light, as well as the ability to travel through time), Spaceflight, Self-Sustenance (Type 1), Dimensional Travel, Sealing, Numerous forms of BFR, Breaking the Fourth Wall, Pocket Reality Manipulation (Capable of trapping enemies inside of household objects, as shown when he imprisoned Lance Wilder inside of a television. Holds ownership and control over a pocket dimension housed inside of a painting, to and from which he can transport others with a thought. As "Dr. Ospylac", he was able to create and later remove a pocket reality disguised as a back-alley medical clinic)

Attack Potency: Likely Street level physically (Should not be overwhelmingly weaker than Needles Kane), Large Planet level via reality warping and size manipulation (Stretched a man's face around the entirety of Earth after enlarging himself to planetary size.)

Speed: Likely Peak Human with Supersonic+ reactions (Has competed against other Twisted Metal contestants, all of whom see bullets in slow motion. Reacted to and dodged shells fired from Minion's tank shortly after his arrival in Hell), as high as Relativistic+ via size manipulation (The largest known size he has reached would grant him this much speed.), possibly higher (Amplified the speed of Amanda Watts' dragster to such a degree that it broke through a barrier and began travelling backwards through time. However, it is unknown whether or not he would be capable of applying this to himself, as he has never been shown using this ability to affect a living being.)

Lifting Strength: Superhuman (Held onto the wing of a plane with his bare hands, and did so while it was flying at an extremely high altitude), as high as Class Z via size manipulation

Durability: Wall level at his physical peak (Far too inconsistent to rate properly; some incarnations have been killed by bullets and knife wounds, while others have survived fatal car crashes and hundred-story falls.), as high as Large Planet level via size manipulation

Stamina: Extremely high. As a teenager, he survived a car crash which killed several other people, and was able to walk away from it despite losing an immense amount of blood.

Intelligence: Genius level. Extremely manipulative and cunning, routinely outsmarting the other characters at every turn. Possesses a strong understanding of his powers as well as a creative streak in regards to their usage. Is also exceptionally skilled with vehicular and weapons mechanics, having personally modified all of the contestants' vehicles to perform special attacks of which they would not have been capable before.

Weaknesses: Mildly arrogant. Despite his intelligence, he has been tricked on a few separate occasions. Most incarnations of the character appear to be incapable of using their powers outside of granting wishes. (See note below.)

Note: As Calypso has no "canon" incarnation to speak of, this profile details a composite character, drawing from all of his appearances within the games as well as information found within the instruction manuals and the limited-issue Twisted Metal 2 comic book.

As well, given the fact that the most recent incarnation of the character has been shown using his abilities to suit his own purposes numerous times, this profile assumes that said powers are no longer restricted to granting wishes.

"I raise my glass to the one competitor who's made it all the way."

Gaea (Riordanverse) Gaea's profile (Speed was equalized and both had basic knowledge of each other.)

Bill Cipher (Gravity Falls) Bill's Profile (Speed was equalized, Calypso was planet-sized and had prior knowledge)

Four (Battle for Dream Island) Four's Profile (5-A Calypso and 4-B Four was used, both were bloodlusted and Speed was equalized)

Chowder (Chowder) Chowder's Profile (9-C Calypso was used, Battle was in a Rooftop and Speed was Equalized)

Bugs Bunny (Looney Tunes) Bug's Profile (Speed was Equalized, Both were at their strongest and Calypso had Prior knowledge)

AM (I Have No Mouth, And I must scream) AM's Profile (Speed was equalized)