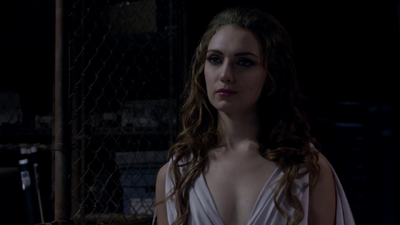 Calliope was the Goddess of Epic Poetry and one of the nine Muses in Greek Mythology. She inspires creativity in directors and producers, and then devours them once their play is done and their vision is realized.

Powers and Abilities: Superhuman Physical Characteristics, Telekinesis, Teleportation, Immortality (Types 1 and 2), BFR, Empowerment (Draws power from worship, sacrifices, and consumption of human flesh), Summoning (She could create creatures based on characters and props from the play to inspire and protect the director), Superhuman senses, when worshipped, she should be capable of doing practically anything other pagans deities can, which would give her Reality Warping, Time Manipulation, Soul Manipulation, Telepathy, Immunity to Time Manipulation

Intelligence: High. She has been alive for at least thousands of years

Retrieved from "https://vsbattles.fandom.com/wiki/Calliope_(Supernatural)?oldid=5865014"
Community content is available under CC-BY-SA unless otherwise noted.