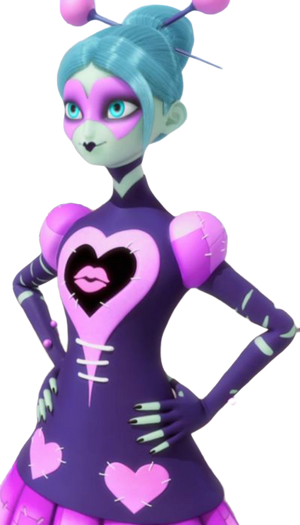 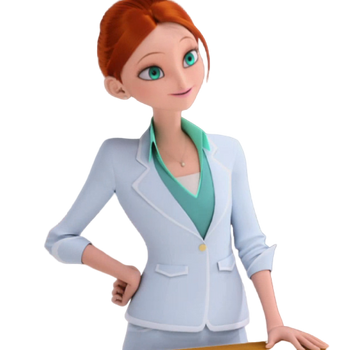 Superhuman Physical Characteristics, Empathic and Morality Manipulation (Her kisses are able to blow kisses that turn people into zombies who seek to kiss and hug other people), Pseudo-Disease Manipulation (Her zombies have contagious kiss that turns the victims into zombies as well), Homing Attack and Danmaku (Through her smooch blasts) Expert Hand-to-Hand Combatant, Immortality (Type 6), Acrobatics; Duplication, Paralysis Inducement, Power Bestowal, Possession, Corruption and Mind Manipulation (If her Akuma isn’t purified after being defeated, it would start to multiply into many more Akumas and infect different persons, turning them into Zombizous that would remain immobile until Caline gets Re-Akumatized)

Speed: Unknown | At least Supersonic+ with Massively Hypersonic+ combat and reaction speed (Should be comparable, if not faster, than The Mime, Was able to keep up with Season 2 Ladybug and Cat Noir)

Lifting Strength: Regular Human | Class M (Should be comparable to other akumatized villains)

Striking Strength: Wall Class | At least Multi-City Block Class (Should be comparable to other Akumatized Villains)

Durability: Wall level (Comparable to Marinette, who survived a door busting kick unharmed) | At least Multi-City Block level (Should be comparable to other Akumatized Villains, took hits from Season 2 Ladybug). Akuma reproduction makes her somewhat hard to put down.

Weaknesses: If her zombifying lip gloss is removed, she has to use her lip balm again to get her powers back. Her powers will be lost if her lip balm has been destroyed, though the Akuma inside of it is able to multiply and can return her powers once feeling negative emotions again unless purified.

Zombizou can send kisses to her victims, and if they're kissed, they turn into kissing zombies after a short amount of time. The victims then are starting to search for other people to kiss and zombify as well. Zombizou also seems to be able to control her victims when she wants to.

Retrieved from "https://vsbattles.fandom.com/wiki/Caline_Bustier?oldid=5966589"
Community content is available under CC-BY-SA unless otherwise noted.