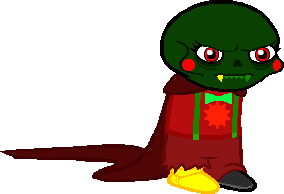 Caliborn, also known by his chat handle, undyingUmbrage, is Calliope's "brother", the other, opposed existence within her body. Even amongst evil cherubs, Caliborn is extremely malicious and is obsessed with death and destruction, which he seeks to spread and enjoy as he pleases for the simple reason that he can and he wants to. As with his sister, his title is one of the rare and powerful master classes; he is the Lord of Time.

After killing his sister and conquering his session, a dead session so impossibly difficult that it was considered unbeatable even for him, he ascended to become a God Tier and killed his denizen, Yaldabaoth. This allowed him to gain access to his God Tier clock, which he destroyed, and its powers he absorbed. Afterwards, he allowed himself to be sealed within Lil' Cal by Dirk with several other entities, fusing with them and becoming Lord English, an indestructible, time-travelling demon who has assured his existence throughout all of space and time, allowing him to go about destroying all of existence.

Superhuman Physical Characteristics, Hammerspace, 4th Wall Awareness, Power Nullification with the Juju Breaker (Can nullify any kind of Juju-like power by hitting something with the crowbar), Tolerance to Pain, Resistance to Gravity Manipulation

Same as before, Flight, "Can unlock any lock" Plot Manipulation (Unlocked and control the narrative) Time Manipulation (As a Lord of Time, he has complete control over the flow of time), Time Travel, Fate, Probability and Causality Manipulation (He has a passive control over the forces of inevitability, which make in sort that all outcomes, possibilities, and causality will answer him, to the point of being able to control everything that happens and can happens, even retroactively), Life Creation, Regeneration (Mid-Godly), Immortality (Types 1, 4, and 8; can only be killed if his death is 'Heroic' or 'Just'), possibly Power Nullification (Can prevent the reader from advancing in the story) Resistance to Heat Manipulation

Same as before minus the type 8 of his immortality, Energy Projection, Invulnerability, possibly Conceptual Manipulation (type 2), BFR, Teleportation, Invisibility and Intangibility with the Ring of Void Acausality (1, 3 and 4), Sealing, Plot Manipulation and Power Modification with The Treasure (It sealed the Beta Kids, with its attraction being said to be metatextual and being able to overwrite the powers of the targets), Resistance to Soul Manipulation (Even when weakened, Dirk couldn't destroy his soul)

Attack Potency: At least Mountain level (He constantly beat Gamzee to the point of make him vomit blood and is also considered as one of the strongest Sburb player, being able to win a session considered as "impossible") | At least Multiverse level+ (As a Lord, one of the two master classes, Caliborn should be far above most other God Tiers and comparable to God Tier Calliope, who destroyed the Green Sun, which is made of two Bilious Slick). | At least Multiverse level+, possibly higher (Killed Yaldabaoth, the strongest Denizen. Sealed away John, Rose, Dave, and Jade before casually trouncing Jane, Roxy, Dirk, and Jake. Possessed near complete control over his powers at this point) | At least Low Complex Multiverse level (Was destroying Paradox Space, which is all of existence, including infinite Genesis Frogs and the Horrorterrors that transcend them in the Furthest Ring, and also slaughters said races. Killed Andrew Hussie, the author of MS Paint Adventures), possibly higher (Homestuck's multiverse is said to include a hierarchy of creators that is stated to be infinite, with each layer being infinitely greater and bigger than the last, however, it is unknown how serious this is due to how it's metaphorical)

Speed: At least FTL+ (Should be comparable to Gamzee) | Immeasurable (Should be much faster than most other God Tiers) | Immeasurable (Effortlessly stomped all the Alpha kids) | Nigh-Omnipresent (Lord English exists in all timelines, even prior to his summoning and his birth; he is already here).

Stamina: Superhuman (Chewed off his own leg and trekked across Earth without showing any signs of exhaustion) | Likely limitless.

Standard Equipment: His AK-47 / Cane, Lil' Seb, Gamzee, Lil' Cal, the Ring of Void, the Ultimate Weapon, The Felt, and a Juju Breaker | The Green Sun Cane and the Golden AK.

Intelligence: Although referred to as "learning-impaired" by both himself and Hussie, Caliborn is noted to be exceptionally cunning, inventive, and brutal, and was able to use The Felt's powers to their fullest extents to win his session, which was so difficult it was seen as "nearly impossible", even for him. Also, he later develops an exceptionally high understanding of the mechanics of time and space, masterminding the assurance of his existence across all of universes and becoming a temporal inevitability.

Weaknesses: Due to the unusual method behind his predomination, Caliborn is stuck in a perpetual state of prepubescent immaturity. | Lord English is weak to cueball artifacts and the Ultimate Weapon

"THIS TAKES PLACE AFTER I GET THE MAGIC RAINBOW EYES. AND YET, STILL BEFORE I AM HUGE AND WEAR A DAPPER TRENCH COAT FOR WINNERS."

Caliborn about to enter the dead session.

The grin of a boy man about to embark on a journey to destroy all of space-time.

Caliborn acquires the Ultimate Weapon Juju as a prize for defeating Yaldabaoth.

In one of the final events in all of Homestuck, Caliborn absorbs the power from the broken grandfather clock and completes his apotheosis into the Lord of Time. 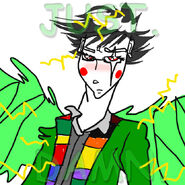 Caliborn's OC. Do not steal.