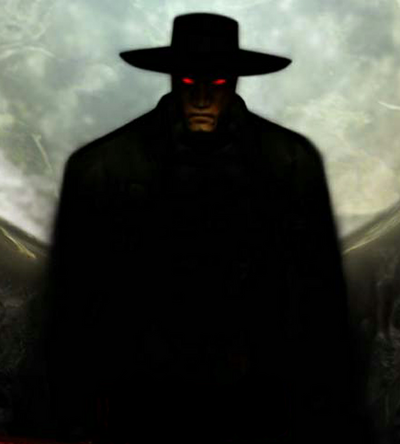 Caleb (last name unknown) is the main protagonist of the Blood franchise, originally created by Monolith Productions. Born in western Texas in 1847, Caleb's tale truly began when he ran across a burned-out homestead housing a lone woman, a cultist named Ophelia Price. After taking her into his protection, Ophelia eventually became Caleb's link to the cult to which she belonged; an evil collective known as the Cabal whose servants worshipped the dark god Tchernobog. The two of them soon rose through the ranks of the cult, eventually becoming part of the Chosen— Tchernobog's elite servants.

Sometime after 1871, Caleb, Ophelia and the rest of the Chosen were betrayed by Tchernobog, disavowed and cast aside for their lieutenants to finish off one by one. Caleb was the last in line, hurled into a bottomless pit by Tchernobog himself.

Caleb's revenge would finally come in 1928, the year in which he was resurrected in Morningside Cemetery. After a long and tireless rampage that saw the demise of every lieutenant responsible for the deaths of the Chosen (as well as countless other members of the Cabal), Caleb confronted Tchernobog and defeated him in battle, taking his life and inheriting his power in the process. With his companions avenged and the god slain, Caleb left to walk the Earth, going on to strive for the leadership of the Cabal and a means to resurrect Ophelia and the other Chosen.

Powers and Abilities: Superhuman Physical Characteristics, Weapon Mastery, Immortality (Types 1, 4 and 7), Healing (Mid-Low with the Doctor's Bag, as well as by consuming the hearts of humans), Forcefield Creation and Attack Reflection (via Reflective Shots), Invisibility (via Cloak of Invisibility and the Stealth talisman), Enhanced Vision (via Beast Vision), Underwater Breathing (Type 3 via diving Suit), Statistics Amplification (via Armours and the Life Seed), Absorption, Fire Manipulation, Energy Manipulation and Soul Manipulation with the Life Leech (Fires blasts of flame and magic energy which drain the victim's life-force and deal Spirit damage.), Death Manipulation, Distance Negation and Armor Negation with Voodoo Dolls (Ignores distance and armor with its attacks. Waving a hand across one of the dolls instantly kills a target and severely harms those nearby), Portal Creation, Chain Manipulation and Teleportation Negation (via the Flayer), Damage Boost (via The Anger talisman), Damage Reduction (via the Willpower talisman), Homing Attack (via the Orb), Clairvoyance (via the All-Seeing Eye), Invulnerability (via Death Masks), Enhanced Jump and Resistance to Fall Damage (via Jump Boots),  natural Resistance to Soul Manipulation (Able to withstand direct Spirit damage. Capable of surviving the Life Leech's soul-draining effects without the use of Spirit Armour), Resistance to bullets (via Body Armour), Resistance to Fire and Explosions (via Fire Armour), vastly improved Resistance to Soul Manipulation, as well as Resistance to Magic (via Spirit Armour), Resistance to Possession (After killing the 16th incarnation of Tchernobog, he gained the latter's essence and reality-bending powers without being overtaken by the dark god's will and personality)

Attack Potency: Multi-City Block level physically (Killed the Naga. Has defeated his fellow Chosen in combat. Crushed Shial's torso with a single stomp. Tore open Gabriel's chest with his bare hands, along with Shial's spiderwebs that were capable of restraining the latter. Singlehandedly defeated the Beasts who were meant to serve as new members of the Chosen.), higher with weapons. Voodoo Dolls and the Life Leech can ignore conventional durability.

Speed: Supersonic combat speed and reactions (Capable of reacting to and dodging Tesla Cannon projectiles which, at the very least, should travel at this speed. Able to land hits on enemies who can also react to such projectiles.)

Lifting Strength: At least Class 1 (Ripped open Gabriel's corpse and pulled out its organs with his bare hands)

Durability: Multi-City Block level physically (Can withstand hits from the Naga, as well as blows from the other members of the Chosen and numerous other enemies capable of killing them), higher with Armours, the Willpower talisman, and the Life Seed.

Intelligence: Above average. Possesses almost two centuries of experience, a mastery of firearms, explosives and the use of improvised weaponry, as well as a fairly impressive knowledge of show tunes. Despite this, he has made errors of judgment before, and has admitted on one occasion that he "never said (he) was smart". At the end of the first game, he was able to defeat Tchernobog in "a battle of wit and skill".

Weaknesses: Almost completely psychotic. Most of his arsenal is based around bullets and fire. Reflective Shots cannot reflect fire-based attacks, nor can it reflect attacks that target the soul. Using the Life Leech while it's devoid of trapped souls will cause it to drain his own soul as compensation. Despite his years of experience, Caleb's somewhat stubborn and straightforward-thinking and has had moments of questionable tactical judgment in the past.