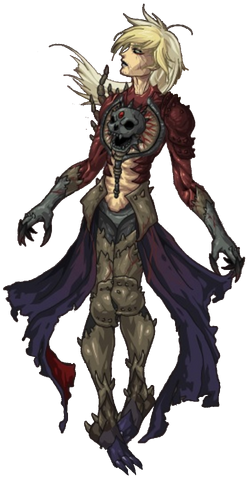 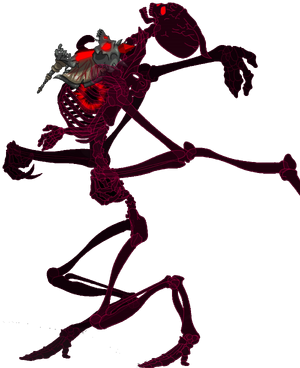 Caitiff is an entity created by Baron Jaysun Valtrith via a ritual performed on Serenity with a portion of Mysterious Stranger and the Shadowreaper of Doom, modeled after Baron Valtrith’s sister: Dyana Valtrith. She is one of the few antagonists within the Friday the 13th story-lines and one of the two main antagonists of her own story-line.

Classification: Combination of Mysterious Stranger’s cloak scrap, Serenity, and the Shadowreaper of Doom

Attack Potency: Town level (Responsible for the destruction of Castle Valtrith, the town of Popsrocket and Falconreach), higher with Corrupted World Destroyer (Could possibly possess a degree of firepower comparable to when under control of the Hero. Was intended to cover the world in darkness and snuff out the sun, though its reluctance of action disallowed the expression of such firepower). Potentially Planet level with the Elemental Orbs (The combined power of the Elemental Orbs should be comparable to each of the Elemental Avatars, and comparable to DreadDragon Drakath, who had originally absorbed all of them) | Town level (Comparable to the Hero)

Speed: FTL (Comparable to the Hero, FTL+ with Corrupted World Destroyer (Should be equal to the original | FTL

Durability: At least Town level (Survived a direct blast from the early-game World Destroyer and from the Hero) | Town level

Stamina: Virtually limitless. Requires no means of sustenance via nutrition or rest due to lacking the biological components necessary.

Intelligence: Average. Possesses relatively great degrees of adaptive capability but originated with a much lesser degree of mental capacity, eventually reaching the mental capability if a sophisticated individual given enough time.

Retrieved from "https://vsbattles.fandom.com/wiki/Caitiff?oldid=5364285"
Community content is available under CC-BY-SA unless otherwise noted.