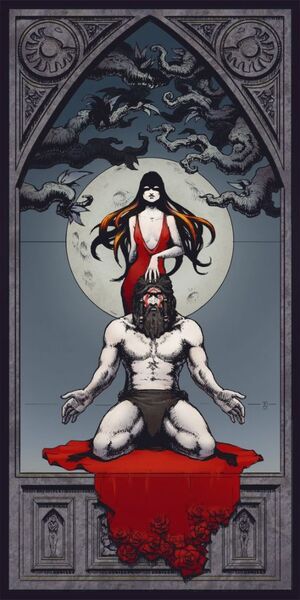 Caine is the first murderer and the first Vampire in World of Darkness, stated to be the strongest of them all. Caine had seduced Lilith in awakening him, bringing forth the powers that the Vampires would use for Millennia to come.

Classification: The First Vampire, The Second Mage, The First Murderer, Awakened, Forsaken of God | The Eye of Caine | Archmage, God

Powers and abilities: Superhuman Physical Characteristics, Attack Reflection, Curse Manipulation, Death Manipulation (The Seven Fold Curse inflicts 7 times the damage dealt onto him, and if he were to die, the killer would die seven times a more painful death.), Non-Physical Interaction (Caine is able to interact with Angels and Lilith, who are conceptual beings), Immortality (Type 1) Dimensional Travel (Was able to leave Jehovah's garden and went to Lilith's garden which are in separate Tapestries), Self-Sustenance (Type 1, 2 and 3), Resistance to Existence Erasure (Would have had to travel through the Abyss/Void which negates existence)

Powers and Abilities: All previous abilities decreased in power, Large Size (Type 6, is a Literal Star), Power Nullification (The Gaze of Caine reduces beings down to the levels of thinbloods (15th Generation)),

Powers and Abilities: All previous abilities except Large Size,  Higher Dimensional Manipulation, Nigh-Omniscience, Forcefield Creation, Disease Manipulation (Able to create Viruses and Diseases), Mathematics Manipulation, Law Manipulation (Stated to be able to create and change the Laws of Reality), Abstract Existence (Type 1) (Stated to have all the powers of all other vampires, which would include Haqim, who is the embodiment of Murder), Resistance to all previously stated abilities.

Attack Potency: At least Athlete Level (Slew Abel, to make a sacrifice to God, in one strike) | At least Star level (Should be equal to Lilith, who wore a cloak of the Night itself and would pluck stars from it.), many abilities ignore conventional durability | At least Large Star level via Size (Much more powerful than before, Caine's mere eye is stated to be a Star) | At least Universe level+ (Stated to be the strongest Vampire and should be far stronger than Lasombra, who is one with the Abyss/Void, should be equal to 5th tier Mages), possibly Outerverse level (Caine is able to create a Pocket Realm devoid of Life, Death, Time, Space, Dimensions etc. which is described as Endless, and is able to impact the Concepts of Time and Space, as well as the Supernal Realms), many abilities ignore conventional durability. Outerverse level with Transformations | Outerverse level (Exists beyond the scope of the Supernal realms, where a Nigh-infinite Platonic truths give meaning to the Fallen world, including the Platonic concepts of Time and space, transcends the idea of the One, Two and Three, transcending Beings who created them, stated to be able to kill an Angel), many abilities ignore conventional durability.

Speed: Immeasurable (Should at least be equal to Mages, who are able to travel in a Void outside time, space and existence, able to react to Demons) | Immeasurable, possibly Irrelevant. Irrelevant with Transformations | Irrelevant

Standard Equipment: Many, although the limit is unknown.

Intelligence: Supergenius (Able to create Platonic machines as well as create weapons that can destroy beings in every dimension.Able to create machines that purge the ability of Death from them) | Nigh-Omniscient (Knows the past, present and future of all things in the Tellurium)

Weaknesses:  Normal Human Weaknesses | Cursed to never be able to be in the Sun's presence or risk immediate Death.

Chrysalis (DC Comics) Chrysalis’ profile (Both were Low 2-C, and speed was equalized)

Start a Discussion Discussions about Caine (World of Darkness)