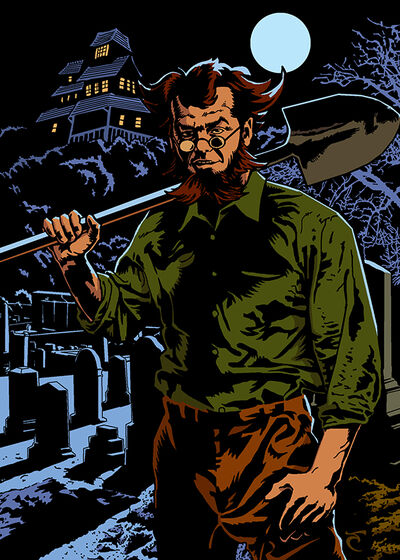 Cain is the narrator of the DC series House of Mystery. He is the brother of Abel and son of Eve and Adam.

Cain killed Abel becoming the first murderer, and was given a Mark on his forehead by God, indicating that any person who harms him will have that same harm visited upon them sevenfold.

Classification: A resident of the Dreaming, The first murderer, Purveyor of Nightmares and penny dreadfuls, Caretaker of the House of Mystery

Powers and Abilities: Immortality (Types 1, 5 and 8. Cain is under the protection of Dream of the Endless and The Presence. As an entity of the Dreaming, Cain won't be truly killed as long as Dream is alive. Cain and Abel have a contract as a duo with Dream, and should any of them be destroyed, it is written on the contract that Dream will recreate the destroyed brother. Cain is by nature a character that exists more in thought than in reality), Attack Reflection (Cain is under the protection of God, possessing a Mark on his forehead indicating that any person who harms him will have that same harm visited upon them sevenfold. Even Lucifer Morningstar didn't dare to harm him when Dream sent him as a messenger. When the Kindly Ones laid waste to the Dreaming, even they wouldn't hurt Cain because of his curse), Empathic Manipulation (Cain and Abel serve as a subliminal catharsis for dreamers and without them, everyone would act out their collective rage in the waking world, driving it and the Dreaming to the brink of destruction), Dream Manipulation, Invisibility, Acausality (Type 1; He was unaffected when Creation was rewritten by Goldie. Cain and Abel were also unaffected when Fig Keele stabilized reality, and still remember events that were already written out of existence), Dimensional Travel (He is capable of independent dimensional travel between the Dreaming and the real world)

Attack Potency: Unknown, likely Wall level (Can easily chop off human limbs with his axe and sword. Sliced a block of stone in half and threatened Abel that he would smash him through a wall)

Durability: Unknown, likely Wall level (Extremely hard to kill due to his mark and immortality)

Range: Extended melee with weapons like axe and sword, hundreds of meters with firearms

Standard Equipment: Cain is the original caretaker of The House of Mystery and has access to the artifacts that the house contains, revolver, axe

Intelligence: High. He is the caretaker of mysteries, and has an innate knowledge of all mysterious things