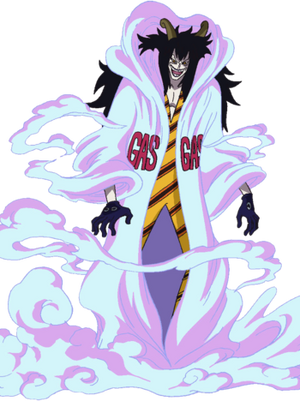 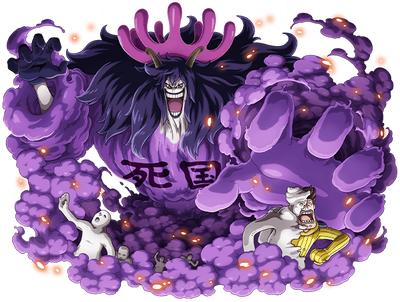 Caesar Clown, also referred to as "Master" by his subordinates, is a former colleague of Vegapunk and the primary antagonist of the Punk Hazard Arc. Caesar is the leading expert on chemical weapons of mass destruction and is a demented scientist that has a bounty of 300,000,000 on his head.

During the Dressrosa Arc, Donquixote Doflamingo declared Caesar to be his direct subordinate, meaning Caesar is a de facto member of the Donquixote Pirates, and thus protected from the law. Upon Doflamingo's defeat and arrest, this protection is lost, and Caesar's criminal status is once again in full. He is currently a hostage of the Straw Hat-Heart Pirate Alliance.

Name: Caesar Clown, referred to as "Master" by his underlings, "Gastino"

Powers and Abilities: Superhuman Physical Characteristics, Genius Intelligence, Basic Swordsmanship, Gas Manipulation, Oxygen Manipulation (Can remove oxygen in a certain area to nullify fire-based attacks or asphyxiate his opponents), Transformation, Poison Manipulation, Invisibility (Can disperse himself thin enough to be invisible), Explosion Manipulation with Gastanet, Fire Manipulation with Miok Gas, Regeneration (Mid-High, only in Logia form), Flight, Elemental Intangibility, Inorganic Physiology (Type 1. While he's turned into gas), Body Control (Is capable of altering the size and shape of his logia-form, can disperse his entire body by turning into gas), Heat Manipulation and Breath Attack with Gastille, Gas Absorption, Resistance to Gas Manipulation (All Logias are resistant to their respective elements) | All previous plus, Large Size (Type 1) and Limited Petrification (Shinokuni gas doesn't exactly turn people into stones but turn them into chemical statues).

Stamina: High (Stood up and continued fighting after being punched in the face and torso several times)

Standard Equipment: A flintlock, a pair of castanets, his “Blue Sword” and his pet “Smiley”

Weakness: Standard Devil Fruit users weaknesses. His gas form appears to be weak against fire, although this is mitigated by his ability to minimize oxygen levels in the surrounding area, preventing combustion. 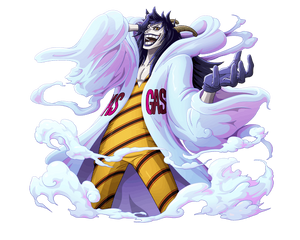 Gasu Gasu no Mi (Gas-Gas Fruit): A Logia-type Devil Fruit that allows the user to create, manipulate, and transform into gas at will. This Devil Fruit's main strength is the ability to change into a gas-like form, allowing the user to float and travel inside places that normal beings cannot. The gas that Caesar produces is very poisonous. The gas appears to be explosive when set alight, which allows Caesar to create controlled explosions without harming himself. Additionally, the user has the power to manipulate other preexisting gases in any given location, and can even merge with such gases to enhance his own power, depending on the gas being absorbed, all the while being immune to the toxic effects himself. 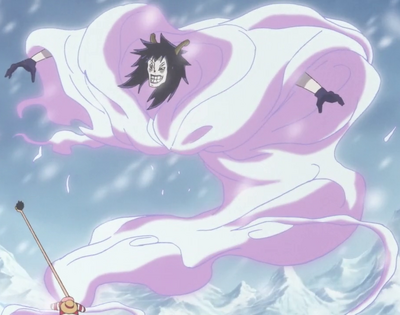 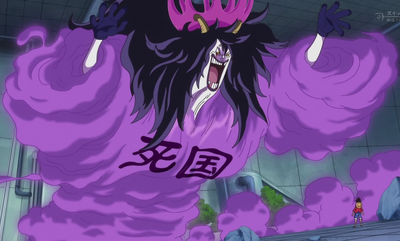