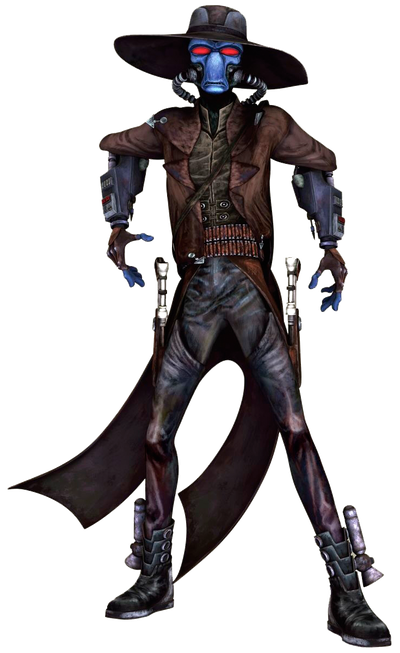 Cad Bane, a Duros male, was the leading bounty hunter in the galaxy during the Clone Wars due to the death of Jango Fett at the Battle of Geonosis. He was specialized in fighting Jedi.

Powers and Abilities: Peak Human to Superhuman Physical Characteristics, master marksman, Flight (via rocket boots), His gauntlet is capable of basic level Hacking and can give powerful electric shocks as a self-defence mechanism and is even equipped with a flamethrower, Master strategist & tactician and over very combat savvy, Skilled hand-to-hand combatant

Attack Potency: Wall level physically (Comparable to Boba Fett. Capable of effortlessly overpowering Clone Troopers as well as Senate Commando Captains, who can match ARC Troopers in hand-to-hand combat). Small Building level with blasters (heavy blaster pistols such as Cad Bane's LL-30 pistols and military issue blaster rifles can pack these kinds of a punch; has collapsed a large section of a rock ledge with a few shots from his twin LL-30s). Large Building level+ with heavy weapons and explosives

Speed: Peak Human with Massively Hypersonic reactions (Comparable to Boba Fett. Specialized in fighting Jedi. Has reacted to close range blaster and laser cannon fire). Subsonic flight speed with rocket boots (Can keep up with slower moving shuttles/yachts and air-speeders, which can cruise at speeds of a few hundred kilometres per hour)

Durability: Wall level (Uninjured from being flung into a cliff face from several storeys and at high speed)

Stamina: At least Peak Human. Has never appeared to be tired out in battle, even after several hours without sustenance and rest.

Intelligence: Very high. Is a skilled combatant with years of experience fighting other bounty hunters and even Jedi. Is a master strategist & tactician who has outwitted foes such as crime lords and Jedi Masters, commanded various successful operations in conjunction with other bounty hunters, even infiltrated the Jedi temple.