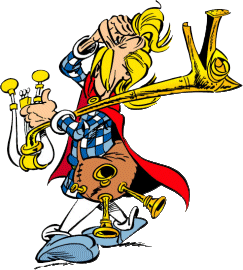 Cacofonix is the Gaulish village's bard who loves singing and playing his lyre, though he always ends up being beat up by Gaul warriors, most especially Fullyautomatix. He is usually only a supporting character, but has a major part in the plots of some albums.

Age: Unknown (Was born before Astérix and Obélix)

Powers and Abilities: Superhuman Physical Characteristics, Weapon Mastery (Can use his bagpipes as a weapon. Used Fullyautomatix's hammer against him), Fear Inducement (Made slaves beg to be whipped and a guard drop down his weapon. Scared away a pack of lions and a dragon. Scared Normans/vikings so fiercely they became completely afraid of heights and loud noises), Pain Manipulation (Can sing so badly he inflicts physical pain to whoever listens), Weather Manipulation (When he threatened to sing, a thunderbolt falls down as seen in Asterix and the Soothsayer. Can cause rainstorms both outside and indoors. Ended a drought in India), Resistance to Status Effect Inducement and Mind Control (With a magic potion)

Speed: Sub-Relativistic (Should be comparable to the javelin thrower)

Lifting Strength: At least Class 100 (Comparable to other magic-potion drinkers)

Durability: At least Town level (Casually gets beat up by other Gaul warriors. Survived a lightning strike, which produce this much energy)

Intelligence: Above Average (Is shown to be a respected school teacher and an important member of the village council, meaning he's very knowledgeable despite the unpopularity of his singing voice)

Weaknesses: Magic potion has a time limit; otherwise none notable.

Note: This profile only covers his stats with the magic potion.

Retrieved from "https://vsbattles.fandom.com/wiki/Cacofonix?oldid=6601434"
Community content is available under CC-BY-SA unless otherwise noted.