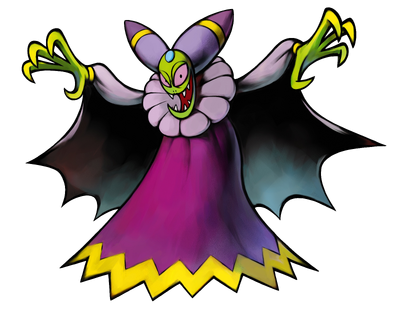 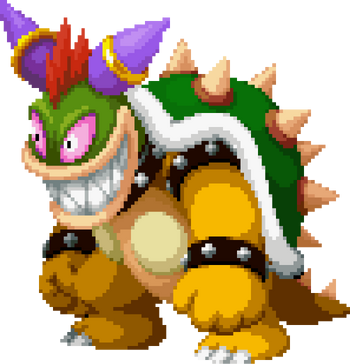 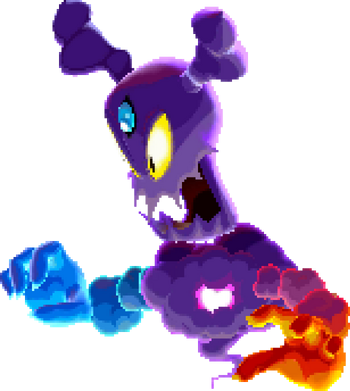 Cackletta is an evil witch from Beanbean Kingdom and a major antagonist in Mario & Luigi: Superstar Saga. She disguises herself as Lady Lima, The Goodwill Ambassador, to steal Princess Peach's voice with her faithful follower, Fawful. This is done in order to use it to activate the Beanbean Star and uses its powers order to gain complete control of the world. Her attempts ultimately fails thanks to the Mario Bros., leaving her in a near-death state after battling them the first time with Fawful rescuing her soul and transferring it into an unconscious Bowser. Taking advantage of this, she then sets plans to dictate both the Beanbean Kingdom and Mushroom Kingdom using Bowser's resources and army.

Powers and Abilities: Superhuman Physical Characteristics, Can create clones that transforms into several bats, Poison Manipulation, Possession (Possessed Bowser), Can create voids that alter her foes weight should they fall into it, Can summon lighting and electrical balls, Fire Manipulation, Flight, Time Manipulation/Time Stop, Can fire lasers from her eyes, Can create doppelgangers of her allies, Can project several colored energy balls, As Bowletta can breath fire, Summon blocks to restrict her opponents, Summon meteors, and gain a black transformation that hurt and confuses opponent upon contact. Statistics Reduction and Breath Attack as Bowletta, Illusion Creation as her soul, she created an illusion of Fawful, Non-Corporeal as her soul and Regeneration (Mid, able to regenerate its arms and head)

Speed: Massively FTL+ (Kept up with the Mario Brothers)

Intelligence: High (Tricked the Mario Brothers in her plan to steal the Beanbean star and during the final battle. She is also capable of building robots and conducted a scheme to dominate two kingdoms in a short time)

Weaknesses: The heart of her soul can take damage when exposed.