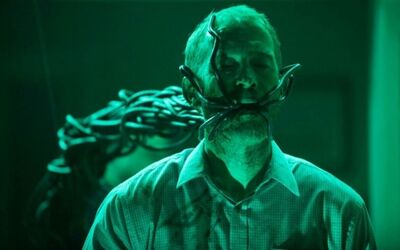 The Monster within Await Further Instructions is a species of cable-snake like beings that exist within every television. One Christmas Day, they finally arose, trapping countless people within their homes. Over the next two days, these beings tricked those within the households to turn on each other before creating puppets from those left to continue their species.

Powers and Abilities: Inorganic Physiology, Enhanced Senses (Each of its "wires" ends with a camera), Small Size (Type 1) (Is roughly the size of a human heart), Size Manipulation (Can stretch its cables an unknown distance), Electricity Manipulation (Could cause power surges, Could cut off telephone lines), Technology Manipulation (Lives within and can communicate to humans through televisions, Can run televisions without power), Madness Manipulation, Poison Manipulation, Smoke Manipulation, and Acid Manipulation/Corrosion Inducement (Can use poisonous gas and acid to melt people, Provided a "vaccine" filled with an unknown liquid which killed the old man), Explosion Manipulation (Can blow up a person after exposing them to enough smoke), possible Creation (Used pipes to spread its gas, Produced "vaccines" countless times), Illusion Creation (Created a hallucination for Annji and Nick), Body Puppetry

Attack Potency: At least Wall level (The smoke can blow up a person when exposed enough, Could cover and shake a house, The explosion of an organ destroyed an old television), Corrosion negates durability

Durability: At least Wall level (The cables are compared to metal, Was unharmed by an axe)

Stamina: Extremely High due to being part machine

Range: At least hundreds of kilometers (Took over the United Kingdom), Likely Planetary (Is implied to have taken over the entire world)

Intelligence: At least Above Average (Can use people's environments to take advantage of them. Is at least somewhat knowledgeable in religion. If they are each separate beings, they work in a hive-mind)