VS Battles Wiki
Register
Don't have an account?
Sign In
Advertisement
in: Tier 8, Tier 6, Marvel Comics,
and 67 more 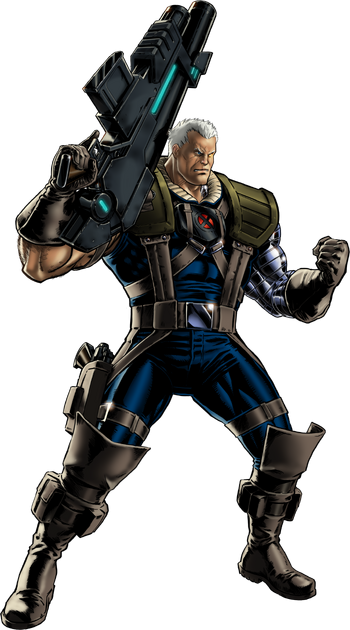 Cable is Nathan Summers, the son of Scott Summers and Madelyne Pryor, a clone of Jean Grey. Mister Sinister had secretly created Madelyne with the plan for her and Scott to produce a powerful mutant child that could destroy Apocalypse.

Unfortunately, Apocalypse captured Nathan as a baby and infected him with a deadly techno-organic virus. Scott reclaimed his son after a battle, but could do nothing save him from the TO Virus. Scott's only option was to send Nathan into the future where the Askani tribe could save and raise him. In that future, Apocalypse seized power and exerted his evil influence on the world. Cable became a messianic warrior seeking to end Apocalypse's evil, but he was pursuing his destiny thousands of years too late.

Unsuccessful in bringing peace about in the future, Cable has returned to his original (616) timeline for several periods as an adult. Notably, he mentored the New Mutants and then X-Force for a time; worked with, and joined the X-Men on many occasions; and eventually took the Mutant Messiah, Hope Summers, into the future to raise her, and then returned her. He continues to work with various teams in the present to protect the future.

Tier: At least 8-C, higher with telekinesis. Up to High 6-C with weaponry | High 6-C

Powers and Abilities: Superhuman Physical Characteristics, Cyborgization, Statistics Amplification (Can increase his physical strength by letting the techno-organic virus consume him), Weapon Creation, Telepathy, Telekinesis, Limited Biological Manipulation (Can manipulate the biologies of his opponents, causing cardiac arrests and such), Flight (As shown here), Extrasensory Perception (His bionic eye can in the infra-red spectrum), Information Analysis (Can scan to locate objects), Explosion Manipulation (Can explode technology using telekinesis, possesses various explosives), Enhanced Senses (Can see clearly in the dark, can see two miles away), Perception Manipulation (As shown here), Pain Manipulation (Made Stryfe experience every pain he's ever caused), Technopathy, Hacking (As shown here), Weapon Mastery (Stated to hold mastery over nearly any present or future weapons), Martial Arts, Matter Manipulation (Put the Pacific Fleet back from the atomic level), Memory Wiping, BFR (Capable of forcing opponents out of battlefield via teleportation), Mind Manipulation (Controlled a person and shut down a person's mind. Overpowers Psi-Shields of multiple guards), Astral Projection (His consciousness left his body), Teleportation (Via bodysliding), Forcefield Creation (Big and skin tight), Size Manipulation (Grew to a giant size), Regeneration (Mid; Lit up with bullets and healed later. Was shot in the head and healed. Low-Mid for his techno-organic body; can reattach limbs and regenerate from damage in almost instantly), Self-Resurrection (Came back to life after he died), Transmutation (Turned a man's epidermis into fungi luminescence), Energy Projection (As shown here), Heat Manipulation (Using finger torches), Electricity Manipulation (As shown here), Adaptation and Resistance to Telepathy (His physiology automatically adapts to external conditions, stated by Moira to be poorly readable by even the best mutant telepaths). Optional Equipment grants him Time Stop using time freeze grenades, Animal Manipulation (As shown here) and Illusion Creation using holograms

Attack Potency: At least Building level (Knocked out Captain America with a single tackle. Significantly stronger than Deadpool), higher with telekinesis. Up to Large Island level with weaponry (Staggered Hulk with his more advanced guns) | Large Island level (Said to be able to extinguish stars with little effort. Shattered the board of the Silver Surfer and also fought evenly with Apocalypse)

Intelligence: At least Gifted. Cable was a highly accomplished battle strategist and, highly adept in many forms of hand-to-hand combat and in the use of a variety of weaponry from both the late 37th-early 39th century and the modern era. He has a diploma in law and is also in possession of an education provided by the Clan Askani, which is far in advance of modern era conventional education, especially in the sciences.

Weaknesses: Forced to use 20% of his power to prevent the Techno-Organic virus from spreading