Attack Potency: Large Building level, likely far higher (Even one of the weaker Battle Maids, Entoma was able to stand up to Evileye. Far more focused on physical attack power than Entoma. Possibly superior to Solution in strength)

Speed: At least Supersonic (Faster than characters like Brain Unglaus), likely Supersonic+ (May or may not be comparable to Albedo)

Lifting Strength: Class 25 (Was going to break multiple layers of thick chains wrapped around her)

Durability: Large Building level, likely far higher (Although her physical defense is low, she should be capable of fighting Evileye)

Intelligence: High (Is able to work very well with a human she just met and utilize each other's strengths while keeping each others weaknesses in mind) 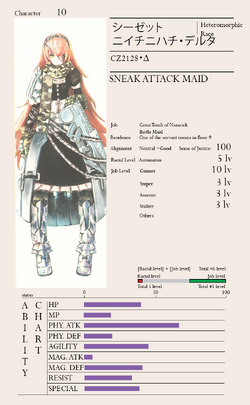