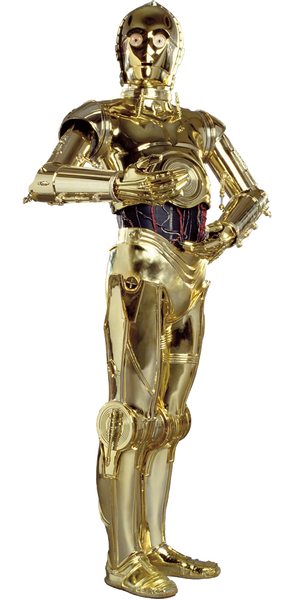 C-3PO sometimes spelled See-Threepio, was a 3PO unit protocol droid designed to interact with organics. He was fluent in over seven million forms of communication, and developed a worry-prone personality throughout his many decades of operation. Along with the droid R2-D2, C-3PO constantly found himself directly involved in pivotal moments of galactic history, and aided in saving the galaxy on many occasions. He was built by the sith lord Darth Vader formerly known as Anakin Skywalker.

Powers and Abilities: Inorganic Physiology (Type 2), Self-Sustenance (Types 1, 2, and 3), Can speak over 6 million forms of language and can calculate odds with precision.

Attack Potency: Below Average Human level (Never demonstrates anything more powerful than a light slap, failed to ward off the cat-sized Salacious Crumb) | Athlete level with B1 Battle droid's Body, Small Building level with Blasters, as he was using the same Blaster that the B1 Droids were using, which are capable of doing this amount of damage.

Speed: Below Average Human (Maximum movement speed appears to be a frantic shuffle) | Peak Human (should be comparable to The B1 Battle droids)

Lifting Strength: Likely Regular Human (Serves as an assistant and butler, other droids of his model are shown lifting objects such as trays of drinks) | Peak Human (Should be comparable to B1 Battle Droids who can easily pick up their blasters and run at the same time they shoot without suffering the recoil)

Durability: Human level | Street level (Should be comparable to B1 Battle droids )

Stamina: Likely high, being a droid with no need to rest and never shown recharging, though he has fussed about his joints rusting.

Range: A few dozen meters with a blaster pistol.

Intelligence: Extremely high. Capable of speaking over 6 million forms of language and form calculations in an instant.

Weaknesses: C-3PO is not a combat droid in any capacity, and dislikes fighting. His protocol droid body is stiff, slow, clumsy, and built for aesthetics rather than function. He is quite cowardly and usually surrenders at the first opportunity. He has a shutoff switch located on the back of his neck.