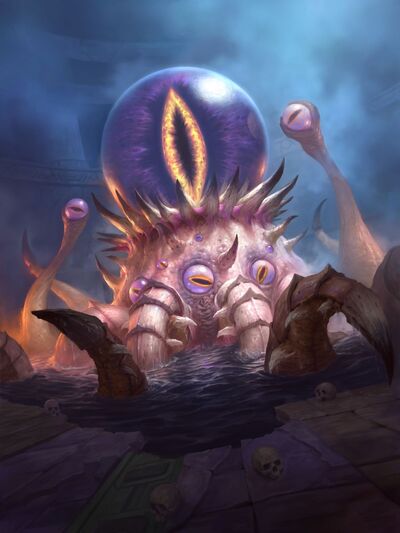 C'Thun is one of the Old Gods: ancient and powerful creatures who had once ruled Azeroth long ago, but were defeated and imprisoned by the titans. C'thun currently resides imprisoned within the city of Ahn'Qiraj in Silithus, where it sent the qiraji to conquer the world in the War of the Shifting Sands, though the qiraji were defeated by the combined forces of the night elves and Dragon Aspects. Thousands of years later, following C'Thun's awakening, it prepared to imprison any dragons who dared enter its lair, but while its gaze was fixed upon them, a group of mortals managed to breach its chamber and kill it against all odds.

Tier: At least 5-B, 2-B via environmental destruction

Powers and Abilities: Superhuman Physical Characteristics, Immortality (Type 1, 5, and 7. The Old Gods do not die, do not live, and reside outside the cycle of life), Large Size, Darkness Manipulation (Old Gods exist as physical manifestations of the Void: a dark vampiric force driven to devour all energy and twist creation inward to feed upon itself), Corruption (Type 3), Energy Absorption, Biological Manipulation (Responsible for the transformation of the aqir into the qiraji), Void Manipulation, Telepathy, Summoning, Acid Manipulation, Madness Manipulation, Causality Manipulation (The Old Gods are responsible for the time anomalies which had caused subtle changes to history), Acausality (Type 1. Ultimately unaffected by time anomalies).

Attack Potency: At least Planet level (Massively superior to the likes of Deathwing and comparable to the other Old Gods such as Yogg-Saron. Waged a year-long war with N'Zoth and Yogg-Saron that ended in stalemate. More powerful than the combined forces of the Titan-Forged and the Elemental Lords. More powerful than G'huun who threatens to rupture Azeroth like a giant boil), Multiverse level via environmental destruction (Responsible for the corruption of the timeways and could potentially have corrupted the main timeway, which would result in doom and destruction throughout countless universes. If the Black Empire containing all four Old Gods of Azeroth were to rise, or if one of the Old Gods’s campaigns succeeded, they would bring about the Hour of Twilight, which Nozdormu mentioned, would leave no more timeways left to protect).

Durability: At least Planet level (Comparable to the other Old Gods).

C'Thun in Hearthstone
Add a photo to this gallery

Retrieved from "https://vsbattles.fandom.com/wiki/C%27Thun?oldid=5640818"
Community content is available under CC-BY-SA unless otherwise noted.