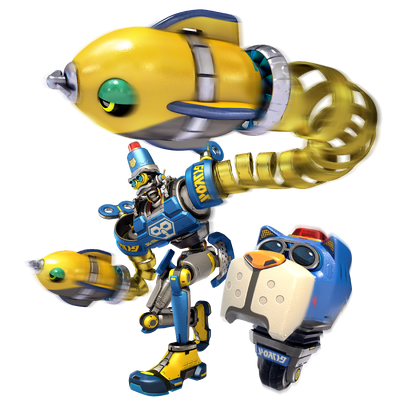 Byte & Barq are fighters in ARMS. They are a robotic duo that fight alongside each other. Byte is a tall police robot, while Barq is a cubic robot dog with a wheel for movement.

They are a duo of police officers that patrol Buster Beach and have entered the Grand Prix together.

Seekie: Medium-weight ARMS that resemble yellow cartoonish-like missiles. These ARMs are able to home in on opponents, as well as being electrified, shocking opponents hit by them, and disabling their ARMS and gadgets temporarily.

Cracker: Light-weight ARMS that resemble party poppers. When charged and launched, the poppers will explode, shooting out fiery projectiles and burning the opponent.

Bubb: Medium-weight ARMS that are basic black gloves. They are able to expand in size when charged, to deliver stronger punches.

Intelligence: Unknown, possibly High being a robot and police-officer.

Barq: Byte's robotic canine partner Barq is shaped like a dog's head mounted on a single wheel. He wears sunglasses and, like Byte, has a beacon light on top of his head. These lights will flash when Byte and Barq's arms are charged. Barq is not controlled by Byte and can attack and move, enabling him to extend combos or take hits for Byte. Using a Rush attack will instantly revive Barq and merge him with Byte, removing the former from the playing field but instantly reviving him if he is knocked out. In addition, Byte's air game is greatly bolstered by Barq, who can be jumped on through several different approaches and behaves like a spring.

Barq can be knocked out for five seconds at a time, however, and takes some time to return to Byte on occasion. Barq's punches are based on a timer. This timer will only be active if Byte is not blocking, dashing, or jumping. Barq will throw a punch every five seconds if Byte does not attack. If Byte performs a punch, Barq will throw one a second later as long as no other action is being performed. After this punch, the timer resumes its five-second cycle. If Byte's ARMS are charged, Barq's ARM will also be charged, and he will punch at the same time. If the punch timer is not active while Byte is knocked down, Barq will immediately punch along with Byte after he gets up. Barq's ARM resembles the Toaster. It does 30 damage uncharged and when charged, it does 70 damage and inflicts Fire.

Rush: A technique every ARMS fighter knows, that allows them to temporarily increase the speed and power of their attacks after charging for a few seconds. Byte combines with Barq for his rush.