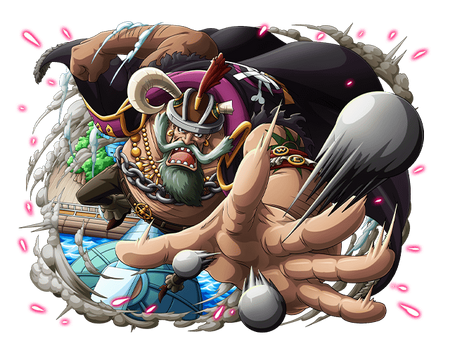 Byrnndi World is the captain of the World Pirates and the main antagonist of the 3D2Y anime special. He is a former prisoner of Impel Down Level 6.

World is a very powerful pirate, as he was held in Level 6 of Impel Down and escaped, which was thought to be near impossible. He had a 500,000,000 bounty, which testifies how large of a threat World was according to the World Government. The government fears him as he attacked World Nobel ships and intended to shoot down Mariejois. They summoned all the Shichibukai to fight World. Despite his age, he remains a world-class threat. He was so greatly feared, that when captured, in addition to putting him in Impel Down Level 6, they froze him, so there was virtually no chance he could escape. However, this prevented his body from aging, maintaining his powers at the same level they were decades ago despite being chronologically 78 years old

Power and Abilities: Superhuman Physical Characteristics, Trained in Rokushiki, Pseudo-Flight (Via Geppou), Master Busoshoku Haki user (Can surround his body with an invisible armor to augment his defensive and offensive capabilities. He can also imbue physical objects, such as his sword), Size Manipulation (World ate the Moa Moa no mi, a paramecia-class devil fruit that allows him to increase the speed and size of objects. He typically uses this to increase the size and velocity of projectiles), Statistics Amplification (Increasing damage, as well as boosting his own already powerful speed to higher levels).

Speed: At least Massively Hypersonic+ (Kept up with Luffy), much higher with Moa Moa no Mi.

Durability: At least Large Town level (Took his from Luffy and from his 2nd Gear form)

Range: Several meters due to size, hundreds of meters with size increased projectiles

Standard Equipment: Flintlock, anything at his general disposal

Intelligence: Above Average, he is experienced in combat and understands how to use his Devil Fruit ability effectively, managed to make a gathering after a short period and maintain them before panic ensued

Weaknesses: Standard Devil Fruit users weaknesses. Very brash and is very trusting of his crew which leads to his original capture at the hands of the World Government.

The Moa Moa no Mi (More More Fruit) is a Paramecia-class Devil Fruit that allows the user to amplify the size or speed of any object they touch Information regarding World and his powers It was eaten by Byrnndi World.

Note: The character of Byrnndi World is NOT canon to the One Piece story.

Retrieved from "https://vsbattles.fandom.com/wiki/Byrnndi_World?oldid=5024824"
Community content is available under CC-BY-SA unless otherwise noted.